Insider Monkey has processed numerous 13F filings of hedge funds and famous investors to create an extensive database of hedge fund holdings. The 13F filings show the hedge funds and investors’ positions as of the end of the third quarter. You can find write-ups about an individual hedge fund’s trades on numerous financial news websites. However, in this article we will take a look at their collective moves and analyze what the smart money thinks of Social Capital Hedosophia Holdings Corp. (NYSE:IPOA) based on that data.

Social Capital Hedosophia Holdings Corp. (NYSE:IPOA) was in 23 hedge funds’ portfolios at the end of the third quarter of 2018. IPOA shareholders have witnessed a decrease in enthusiasm from smart money in recent months. There were 25 hedge funds in our database with IPOA positions at the end of the previous quarter. Our calculations also showed that IPOA isn’t among the 30 most popular stocks among hedge funds.

Heading into the fourth quarter of 2018, a total of 23 of the hedge funds tracked by Insider Monkey were long this stock, a change of -8% from one quarter earlier. The graph below displays the number of hedge funds with bullish position in IPOA over the last 13 quarters. With hedge funds’ positions undergoing their usual ebb and flow, there exists a few key hedge fund managers who were increasing their stakes considerably (or already accumulated large positions). 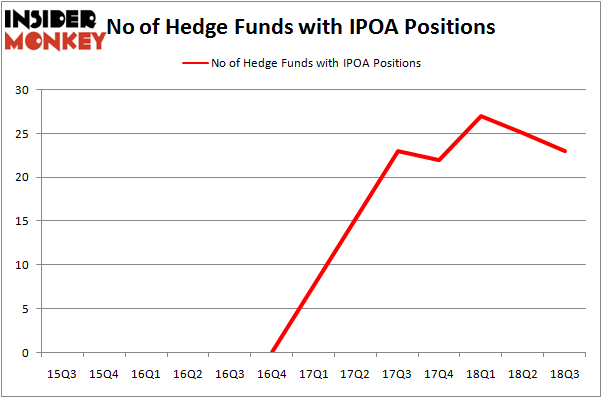 Since Social Capital Hedosophia Holdings Corp. (NYSE:IPOA) has experienced declining sentiment from the aggregate hedge fund industry, it’s easy to see that there lies a certain “tier” of hedge funds who sold off their positions entirely in the third quarter. Intriguingly, Doug Silverman and Alexander Klabin’s Senator Investment Group cut the largest position of the “upper crust” of funds tracked by Insider Monkey, valued at an estimated $33.5 million in stock. Jamie Mendola’s fund, Pacific Grove Capital, also dumped its stock, about $8.1 million worth. These transactions are interesting, as aggregate hedge fund interest fell by 2 funds in the third quarter.

As you can see these stocks had an average of 11 hedge funds with bullish positions and the average amount invested in these stocks was $95 million. That figure was $297 million in IPOA’s case. The Manitowoc Company, Inc. (NYSE:MTW) is the most popular stock in this table. On the other hand CBRE Clarion Global Real Estate Income Fund (NYSE:IGR) is the least popular one with only 2 bullish hedge fund positions. Compared to these stocks Social Capital Hedosophia Holdings Corp. (NYSE:IPOA) is more popular among hedge funds. Considering that hedge funds are fond of this stock in relation to its market cap peers, it may be a good idea to analyze it in detail and potentially include it in your portfolio.