Is Snap-on Incorporated (NYSE:SNA) a good investment right now? We check hedge fund and billionaire investor sentiment before delving into hours of research. Hedge funds spend millions of dollars on Ivy League graduates, expert networks, and get tips from industry insiders. They sometimes fail miserably but historically their consensus stock picks outperformed the market after adjusting for known risk factors.

Is Snap-on Incorporated (NYSE:SNA) a first-rate investment right now? The smart money is buying. The number of long hedge fund bets inched up by 8 recently. Our calculations also showed that SNA isn’t among the 30 most popular stocks among hedge funds. 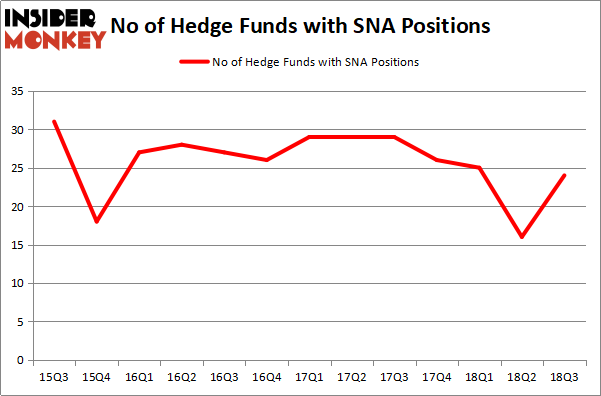 According to publicly available hedge fund and institutional investor holdings data compiled by Insider Monkey, John W. Rogers’s Ariel Investments has the number one position in Snap-on Incorporated (NYSE:SNA), worth close to $168.9 million, accounting for 1.9% of its total 13F portfolio. On Ariel Investments’s heels is Cliff Asness of AQR Capital Management, with a $108.7 million position; the fund has 0.1% of its 13F portfolio invested in the stock. Other members of the smart money that are bullish comprise Jeffrey Gates’s Gates Capital Management, Steven Richman’s East Side Capital (RR Partners) and Richard S. Pzena’s Pzena Investment Management.

As you can see these stocks had an average of 22.5 hedge funds with bullish positions and the average amount invested in these stocks was $952 million. That figure was $605 million in SNA’s case. Athene Holding Ltd. (NYSE:ATH) is the most popular stock in this table. On the other hand Fibria Celulose SA (NYSE:FBR) is the least popular one with only 6 bullish hedge fund positions. Snap-on Incorporated (NYSE:SNA) is not the most popular stock in this group but hedge fund interest is still above average. This is a slightly positive signal but we’d rather spend our time researching stocks that hedge funds are piling on. In this regard ATH might be a better candidate to consider a long position.