Smartsheet Inc. (SMAR): Are Hedge Funds Right About This Stock?

We know that hedge funds generate strong, risk-adjusted returns over the long run, which is why imitating the picks that they are collectively bullish on can be a profitable strategy for retail investors. With billions of dollars in assets, professional investors have to conduct complex analyses, spend many resources and use tools that are not always available for the general crowd. This doesn’t mean that they don’t have occasional colossal losses; they do. However, it is still a good idea to keep an eye on hedge fund activity. With this in mind, let’s examine the smart money sentiment towards Smartsheet Inc. (NYSE:SMAR) and determine whether hedge funds skillfully traded this stock.

Smartsheet Inc. (NYSE:SMAR) was in 47 hedge funds’ portfolios at the end of June. The all time high for this statistics is 50. SMAR has experienced an increase in hedge fund sentiment of late. There were 41 hedge funds in our database with SMAR holdings at the end of March. Our calculations also showed that SMAR isn’t among the 30 most popular stocks among hedge funds (click for Q2 rankings and see the video for a quick look at the top 5 stocks). 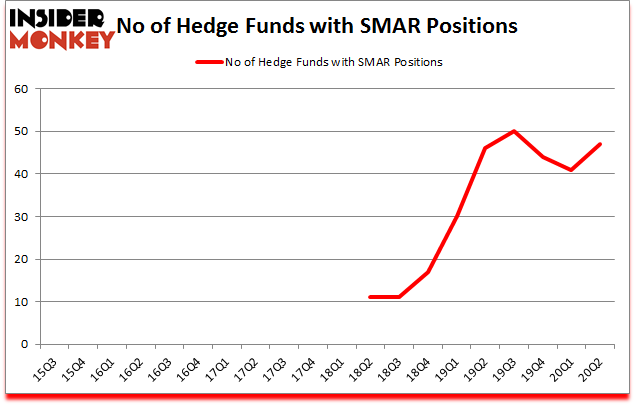 As you can see these stocks had an average of 24.3 hedge funds with bullish positions and the average amount invested in these stocks was $333 million. That figure was $2025 million in SMAR’s case. Athene Holding Ltd. (NYSE:ATH) is the most popular stock in this table. On the other hand Elbit Systems Ltd. (NASDAQ:ESLT) is the least popular one with only 4 bullish hedge fund positions. Compared to these stocks Smartsheet Inc. (NYSE:SMAR) is more popular among hedge funds. Our overall hedge fund sentiment score for SMAR is 88.2. Stocks with higher number of hedge fund positions relative to other stocks as well as relative to their historical range receive a higher sentiment score. Our calculations showed that top 10 most popular stocks among hedge funds returned 41.4% in 2019 and outperformed the S&P 500 ETF (SPY) by 10.1 percentage points. These stocks gained 33% in 2020 through the end of August and still beat the market by 23.2 percentage points. Unfortunately SMAR wasn’t nearly as popular as these 10 stocks and hedge funds that were betting on SMAR were disappointed as the stock returned 7.1% since the end of the second quarter and underperformed the market. If you are interested in investing in large cap stocks with huge upside potential, you should check out the top 10 most popular stocks among hedge funds as most of these stocks already outperformed the market in 2020.