Insider Monkey has processed numerous 13F filings of hedge funds and famous investors to create an extensive database of hedge fund holdings. The 13F filings show the hedge funds’ and investors’ positions as of the end of the second quarter. You can find write-ups about an individual hedge fund’s trades on numerous financial news websites. However, in this article we will take a look at their collective moves and analyze what the smart money thinks of Synchrony Financial (NYSE:SYF) based on that data.

Synchrony Financial continues to lose the support of leading hedge funds and other institutional investors, as smart money ownership of the stock fell for the 4th time in the last 5 quarters during Q2, and is accelerating. Synchrony does have some notable bulls, including Seth Klarman’s Baupost Group (29.3 million shares) and Warren Buffett’s Berkshire Hathaway (20.8 million shares), which is why it was still able to rank among the 25 Stocks Billionaires Are Piling On. Several hedge funds got out of the stock just ahead of Synchrony announcing in July that it wouldn’t be renewing its contract to provide credit card services to Walmart Inc. (NYSE:WMT), which sent the stock into a tailspin. Walmart is now suing Synchrony for $800 million, alleging breach of contract.

According to most investors, hedge funds are seen as worthless, outdated financial tools of yesteryear. While there are greater than 8,000 funds trading at the moment, we look at the bigwigs of this group, about 700 funds. It is estimated that this group of investors manage the bulk of the hedge fund industry’s total asset base, and by keeping an eye on their unrivaled stock picks, Insider Monkey has discovered numerous investment strategies that have historically outstripped the broader indices. Insider Monkey’s small-cap hedge fund strategy exceeded the S&P 500 index by 12 percentage points annually for a decade in its back tests.

Heading into the fourth quarter of 2018, a total of 30 of the hedge funds tracked by Insider Monkey were bullish on this stock, a 23% decline from the previous quarter. By comparison, 46 hedge funds held shares or bullish call options in SYF a year earlier. With hedgies’ sentiment swirling, there exists a select group of noteworthy hedge fund managers who were increasing their stakes significantly (or already accumulated large positions). 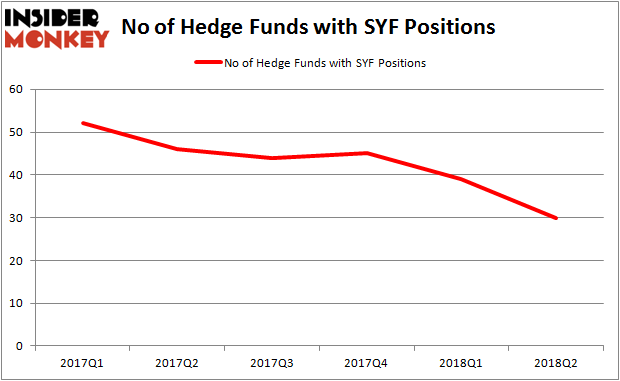 More specifically, Seth Klarman’s Baupost Group was the largest shareholder of Synchrony Financial (NYSE:SYF), with a stake worth $977.9 million reported as of the end of June. Trailing Baupost Group was Warren Buffett’s Berkshire Hathaway, which had amassed a stake valued at $694.4 million. Roystone Capital Partners, Valinor Management LLC, and Omega Advisors were also very fond of the stock, giving it large weighting in their portfolios.

Due to the fact that Synchrony Financial (NYSE:SYF) has experienced declining sentiment from hedge fund managers, it’s safe to say that there was a specific group of hedgies that elected to cut their positions entirely last quarter. At the top of the heap, Sandy Nairn’s Edinburgh Partners cut the largest investment of the 700 funds monitored by Insider Monkey, totaling close to $32.8 million in stock. Jonathon Jacobson’s Highfields Capital Management was right behind this move, as the fund said goodbye to a $23.5 million position. These transactions are important to note, as aggregate hedge fund interest dropped by 9 funds in Q2.

As you can see these stocks had an average of 35 hedge funds with bullish positions and the average amount invested in these stocks was $2.23 billion. That figure was $2.70 billion in SYF’s case. Freeport-McMoRan Copper & Gold Inc. (NYSE:FCX) is the most popular stock in this table. On the other hand Square, Inc. (NYSE:SQ) is the least popular one with only 29 bullish hedge fund positions. Synchrony Financial (NYSE:SYF) is not the least popular stock in this group but hedge fund interest is still below average and falling rapidly. This is a slightly negative signal and we’d rather spend our time researching stocks that hedge funds are piling on. In this regard FCX, which also cracked the list of 25 Stocks Billionaires Are Piling On, might be a better candidate to consider a long position in.