Six Flags Entertainment Corp (NYSE:SIX) investors should pay attention to an increase in hedge fund interest lately. SIX was in 25 hedge funds’ portfolios at the end of the third quarter of 2018. There were 16 hedge funds in our database with SIX holdings at the end of the previous quarter. Our calculations also showed that SIX isn’t among the 30 most popular stocks among hedge funds.

Income rose 5% to $445.4 million, helped by a 3% expansion in participation and a 2% increase in per-capita visitor spending. Experts were forecasting income of $439 million.

Our readers will be interested to know that company director Roedel was responsible for the last major insider purchase of the company’s common stock, buying 954 shares at $62.82 in August. The shares of the company currently trade at $58.39, so the purchase wasn’t exactly profitable.

What does the smart money think about Six Flags Entertainment Corp (NYSE:SIX)? 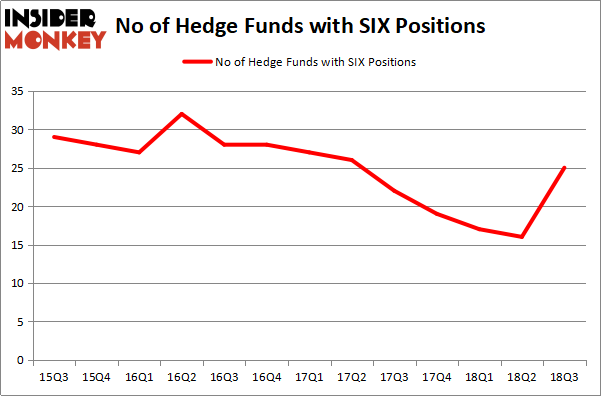 As you can see these stocks had an average of 22.75 hedge funds with bullish positions and the average amount invested in these stocks was $539 million. That figure was $734 million in SIX’s case. Foot Locker, Inc. (NYSE:FL) is the most popular stock in this table. On the other hand, Crane Co. (NYSE:CR) is the least popular one with only 19 bullish hedge fund positions. Six Flags Entertainment Corp (NYSE:SIX) is not the most popular stock in this group but hedge fund interest is still above average. This is a slightly positive signal but we’d rather spend our time researching stocks that hedge funds are piling on. In this regard, FL might be a better candidate to consider a long position.