It’s tough being a jeweler these days. Raising prices to stay in sync with commodity prices and customer demand is a challenging balancing act that only some of the strongest names in the industry – such as Tiffany & Co. (NYSE:TIF), Signet Jewelers Ltd. (NYSE:SIG) and Blue Nile Inc (NASDAQ:NILE) – have pulled off with any degree of regularity. 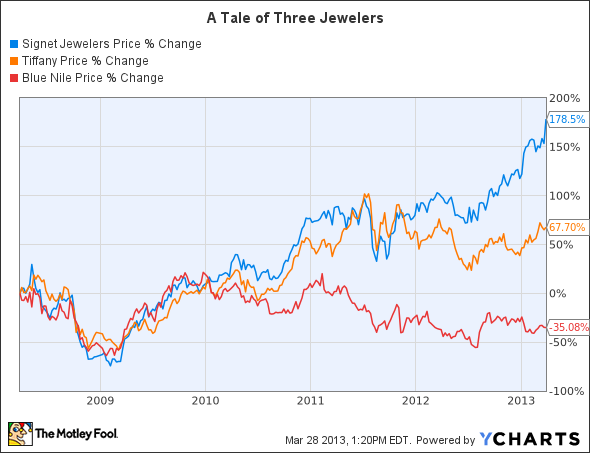 In this article, I’ll focus on Signet Jewelers Ltd. (NYSE:SIG), which has handily outperformed both Tiffany & Co. (NYSE:TIF) and online retailer Blue Nile over the past five years.

What positive growth catalysts have driven Hamilton, Bermuda-based Signet’s meteoric rise, and does it now stand a chance at toppling Tiffany & Co. (NYSE:TIF) , the largest publicly-traded jeweler in the United States?

Global same-store sales rose 3.5%, down from the 6.9% growth it reported a year ago, but still trumping most of its industry peers.

By comparison, Tiffany’s earnings rose 0.7% to $179.6 million, as revenue rose 4.1% to $1.24 billion. Global same-store sales came in flat – a warning sign that Signet is stealing some of Tiffany’s sparkle.

Meanwhile, Blue Nile, a Seattle-based online retailer of diamonds and jewelry, grew its top line 21.2% to $136.1 million last quarter, outgrowing both Signet and Tiffany & Co. (NYSE:TIF) . Blue Nile has shown that a purely online business model is a viable alternative for brick-and-mortar jewelers.

However, Blue Nile apparently suffers from the same weaknesses plaguing e-commerce retailers – weak margins and profit growth. Despite strong sales, Blue Nile only earned $0.39 per share, or $4.9 million, missing the analyst consensus of $0.47.

Blue Nile’s status as an online retailer is a blessing and a curse. Although it allows strong revenue growth without brick and mortar expenses, it is also recognized as a discount online retailer – a step below “affordable luxury”. This keeps its margins firmly pressured, as it has to sell its products at a discount to Tiffany & Co. (NYSE:TIF) and Signet Jewelers Ltd. (NYSE:SIG) to remain competitive.

In comparison to Blue Nile, Signet’s online sales rose 46.9% from $43.5 million to $63.9 million – comprising approximately 4% of the company’s total sales. Tiffany’s online sales currently make up 6% of its total revenue.

During the quarter, same-store sales in the U.S. rose 4.9%, but its smaller U.K. business posted a decline of 1.9%, due to lower store traffic and more purchases of discounted, lower-margin products at its H. Samuel, Ernest Jones and Leslie Davis stores. Ernest Jones notably posted strong sales of Rolex watches at certain locations, leading analysts to suggest that increasing the availability of Rolex watches could have boosted its disappointing U.K. sales numbers.

In fiscal 2014, Signet intends to concentrate on its strengths by adding 65 to 75 new stores in the U.S. by the end of the year. Its $57 million acquisition of Ultra, the fifth largest jewelry chain in the United States, will also help Signet ramp up the pressure on domestic competitors.

Signet’s rapid growth in America is very bad news for Tiffany & Co. (NYSE:TIF) , which posted a 2% decline in U.S. same-store sales. The U.S. remains Tiffany’s worst performing market, and even its Fifth Avenue flagship store in Manhattan, a favorite stop for tourists, reported a 3% decline in sales – down from the 2% drop it reported in the first two months of the quarter.