Shutterfly: A Simple Way to Gain Exposure to the Online Photography Business

On October 4th, 2012 we wrote a piece to help identify investment opportunities in the digital photography business. Today, we want to focus on one of those names: Shutterfly, Inc. (NASDAQ:SFLY).  The company is expected to report Q3-2012 earnings on October 25th, 2012.  We wanted to be proactive and talk about the fundamental catalysts along with valuation that will help you make an investment decision on the company.

Valuation: The company is trading at $29.87 versus its 52-week range of $21.34-$49.53.  On a P/E multiple, Shutterfly trades at 24x the 2012 consensus of $1.24, and a trailing twelve month EV/EBITDA multiple of 18x.  The company does not have any pure-play competitors but two good comps would be VistaPrint Limited (NASDAQ:VPRT) and CafePress Inc (NASDAQ:PRSS) which trade at an EV/EBITDA multiple of 12x, and 6.5x, respectively. Although this would make Shutterfly appear rich at this point, it is a name to watch closely given various positive catalysts going forward. Also, it doesn’t hurt to track a name held by names such as Blackrock and Soros.

1) Shutterfly’s vertically integrated model is a huge advantage given that it has 2 manufacturing facilities in the U.S. This has been a significant advantage in controlling costs and reducing production cycles.

2) Shutterfly’s disciplined management that has made smart acquisitions. The acquisition of Kodak Gallery for just $23.8 million has given the company exposure to Facebook Inc (NASDAQ:FB) users. This was a great way to get exposure to the social media giant and its subscribers.

3) More growth opportunities ahead in the recent acquisition of another start-up Penguin Digital Inc. Shutterfly plans to rebrand and update the iPhone application over the next few months before adding it to its mobile offerings.

Overall, we would conclude by saying that Shutterfly in an opportunity to get involved in the $35 billion US Market for photo print products of which online currently represents less than 10%. Shutterfly is obviously in a growth industry, and given its positioning in the industry it’s a name worth your radar screen.

The Risks in investing in a name such as Shutterly remain seasonality, and any indication from management on the increase in costs, which could hurt margins.

The chart below compares share performance over the past year. “E”s mark earning reports. 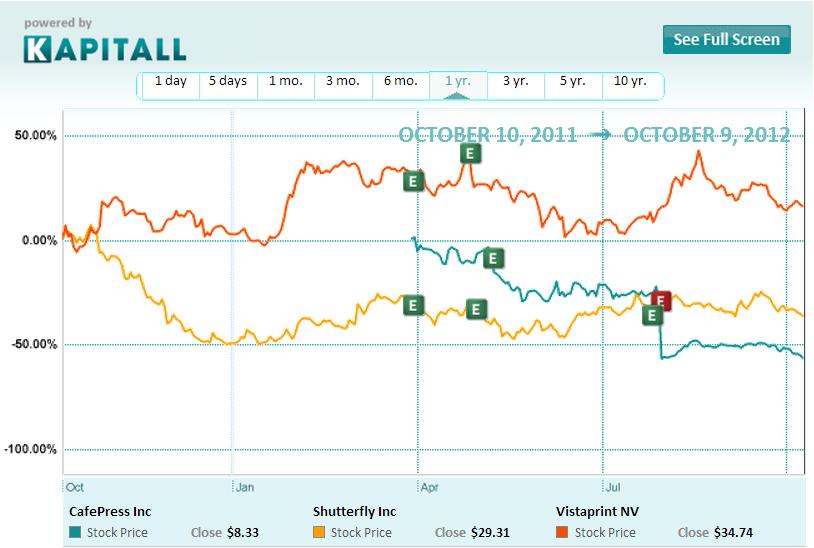 Zynga: Yeah, Not This Quarter Either