Should You Worry About the Walgreen Company (WAG) Earnings Miss?

On Tuesday, Walgreen Company (NYSE:WAG) — which operates the largest drugstore network in the country — reported adjusted EPS of $0.85 for its fiscal third quarter. Adjusted EPS grew 18% compared to the prior year, when Walgreen was suffering from a dispute with pharmacy benefits manager Express Scripts Holding Company (NASDAQ:ESRX). Nevertheless, Walgreen Company (NYSE:WAG) missed the analyst consensus for earnings, sending shares down more than 6% on Tuesday. 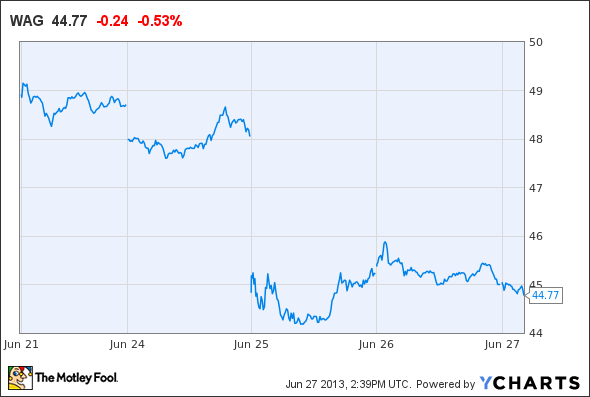 While analysts were expecting higher earnings based on a higher profit margin, Walgreen Company (NYSE:WAG) shares appear to have overreacted to the miss. The company stated that it is on track to reach $125 million to $150 million of synergies this year from its combination with European pharmacy group Alliance Boots. That is at the higher end of the original guidance. Furthermore, Walgreen is increasingly winning back customers who moved prescriptions to competitors like Rite Aid Corporation (NYSE:RAD) and CVS Caremark Corporation (NYSE:CVS) during the Express Scripts Holding Company (NASDAQ:ESRX) dispute.

Most importantly, Walgreen Company (NYSE:WAG) is about to start reaping the benefits of its Balance Rewards program, which it introduced last September. In less than a year, Walgreens has signed up more than 75 million customers, putting the program on par with CVS Caremark Corporation (NYSE:CVS)’ ExtraCare Rewards program. This allows the company to track customer purchases and gain insight about customer behavior. Moreover, the rewards structure tends to encourage repeat visits, which should boost customer traffic and sales going forward.

Turning the ship around
It takes time to change consumer habits, so many of the Express Scripts Holding Company (NASDAQ:ESRX) customers who had to find other pharmacies during the first half of 2012 have not yet returned to Walgreens. Nevertheless, the company has posted strong growth in prescription numbers recently, with comparable store prescription count growing 7% last quarter. By contrast, Rite Aid Corporation (NYSE:RAD) saw a 0.1% decline in that metric during the same period (CVS reports results on a different cycle).

Thus, prescription business is clearly starting to come back. However, Walgreen Company (NYSE:WAG) continues to have weakness in the “front-end,” i.e., non-prescription sales. After four straight quarterly declines in comparable-store front-end sales, the company posted a meager 0.4% increase last quarter. The weakness was partially due to lower promotional behavior, which the company has recently reversed.

Loyalty program benefits ramping up
However, Walgreen has laid plans that should help it regain most of the business it lost over the next several quarters. For the past nine months, the company has focused on signing up as many customers as possible for its new loyalty card, Balance Rewards. Walgreen Company (NYSE:WAG) was the last of the three major drugstore chains to introduce a loyalty card. CVS Caremark Corporation (NYSE:CVS) launched its ExtraCare Card in 2001, and Rite Aid Corporation (NYSE:RAD) introduced its wellness+ card in 2010.