Should You Follow the Smart Money Back Into Oil States International, Inc. (OIS)?

Oil States International, Inc. (NYSE:OIS) was in 18 hedge funds’ portfolios at the end of the third quarter of 2016. OIS has seen an increase in enthusiasm from smart money in recent months. There were 12 hedge funds in our database with OIS holdings at the end of the previous quarter. At the end of this article we will also compare OIS to other stocks including Federal-Mogul Corporation (NASDAQ:FDML), Halyard Health Inc (NYSE:HYH), and Stillwater Mining Company (NYSE:SWC) to get a better sense of its popularity.

What have hedge funds been doing with Oil States International, Inc. (NYSE:OIS)? 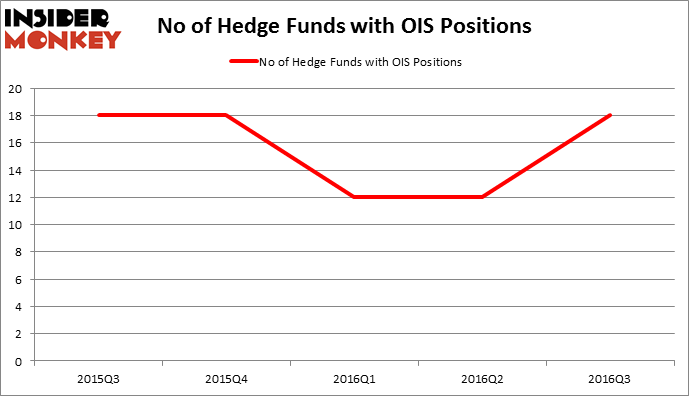 When looking at the institutional investors followed by Insider Monkey, Israel Englander’s Millennium Management has the number one position in Oil States International, Inc. (NYSE:OIS), worth close to $22.2 million. Sitting at the No. 2 spot is Point72 Asset Management, led by Steve Cohen, which holds a $9.9 million position. Other members of the smart money that are bullish contain Chuck Royce’s Royce & Associates, Cliff Asness’ AQR Capital Management, and Vince Maddi and Shawn Brennan’s SIR Capital Management. We should note that SIR Capital Management is among our list of the 100 best performing hedge funds which is based on the performance of their 13F long positions in non-microcap stocks.