Should You Follow Luxor Capital Group And Cut Exposure To CoStar Group (CSGP) And Three Other Stocks?

Christian Leone started Luxor Capital Group in 2002 and has grown it into a financial powerhouse with more than $8 billion in assets under management as of August 2016. Leone and his team employ a value oriented investment approach, focusing on equity and fixed income markets across the globe. According to its latest 13F report, Luxor Capital managed an equity portfolio valued at $3.55 billion at the end of September. The fund has great exposure to the financial sector, with financial stocks accounting for 68% of its equity portfolio’s value.

After a shaky start to 2016, Luxor Capital managed to turn things around, having ended the third quarter on a high note. According to Insider Monkey’s performance measurements, the fund’s equity picks registered a positive return of 14.89% in the third quarter, placing it among the best performing funds in our database. It is important to note that take into account only investments in public equities that have a market cap greater than or equal to $1 billion. In this article, we’ll take a look at some of the fund’s largest bets and how Christian Leone played them during the quarter.

First up is BJ’s Restaurants, Inc. (NASDAQ:BJRI), a stock that Luxor Capital has been holding since the beginning of 2014. At the end of the most recent quarter, the fund’s stake in the company was reduced by 3% to 2.41 million shares valued at $85.8 million according to its latest 13F filing. The stock plunged by roughly 18.9% during the third quarter.

Now, we’re going to take a look at the latest hedge fund action regarding BJ’s Restaurants, Inc. (NASDAQ:BJRI). At the end of the second quarter, a total of 20 of the hedge funds tracked by Insider Monkey were long this stock, a drop of 5% from the previous quarter. More specifically, Luxor Capital Group was the largest shareholder of BJ’s Restaurants, Inc. (NASDAQ:BJRI) at the end of June, followed by Jim Simons’ Renaissance Technologies, which amassed a stake valued at $23.5 million. Balyasny Asset Management, Millennium Management, and Marshall Wace LLP also held valuable positions in the company.

During the second quarter, the number of funds betting on this stock remained unchanged from the first quarter, with 7 of the funds followed by Insider Monkey having reported holding a long position as of the end of June. According to publicly available hedge fund and institutional investor holdings data compiled by Insider Monkey, Luxor Capital Group held the biggest position in DHX Media Ltd (USA) (NASDAQ:DHXM) at the end of the second quarter. Sitting at the No. 2 spot was Debra Fine of Fine Capital Partners, with a $27.4 million position; the fund had 3.1% of its 13F portfolio invested in the stock. Remaining peers that were bullish include Jonathan Lennon’s Pleasant Lake Partners, Eric Sprott’s Sprott Asset Management, and Matthew Drapkin and Steven R. Becker’s Becker Drapkin Management.

Luxor Capital Group’s stake in CoStar Group Inc (NASDAQ:CSGP) is relatively fresh, having been initiated during the second quarter. The fund’s management, however, decided to reduce its holding by 7% during the third quarter, taking it to 221,624 shares. According to the fund’s latest 13F filing, the position was worth $47.9 million at the end of September. The stock ended the third quarter down by 1%.

By the end of Q2, a total of 17 of the hedge funds in our system were invested in this stock, an increase of 6% from the previous quarter. The largest stake in CoStar Group Inc (NASDAQ:CSGP) was held by Daruma Asset Management, which reported holding $65.2 million worth of stock as of the end of June. It was followed by Bares Capital Management with a $58.5 million position. Other investors bullish on the company included Wildcat Capital Management and PAR Capital Management. 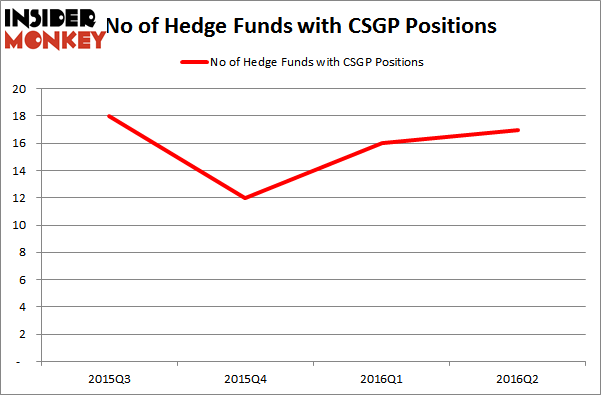 Last but not least is Videocon d2h Ltd – ADR (NASDAQ:VDTH), an Indian company that offers direct-to-home subscription television services. During the third quarter, Christian Leone and his team continued to offload Videocon shares, having reduced their investment by 10% to 5.39 million shares worth close to $52.7 million. The stock returned 15.3% during the third quarter.

Heading into the third quarter of 2016, a total of 14 of the hedge funds followed by Insider Monkey were bullish on this stock, unchanged from the first quarter of 2016. Among these funds, Luxor Capital Group held the most valuable stake in Videocon d2h Ltd – ADR (NASDAQ:VDTH), followed by GMT Capital which amassed $12.3 million worth of shares. Moreover, Trafelet Capital, GLG Partners, and Pentwater Capital Management were also bullish on Videocon d2h Ltd – ADR (NASDAQ:VDTH).

Cantel Medical Corp. (CMN), ShoreTel, Inc. (SHOR): Are These And Other Stocks...