Should You Follow Hedge Funds Out of Capstead Mortgage Corporation (CMO)?

The elite funds run by legendary investors such as Dan Loeb and Jim Simons make hundreds of millions of dollars for themselves and their investors by spending enormous resources doing research on small-cap stocks that big investment banks don’t follow. Because of their pay structures, they have strong incentive to do the research necessary to beat the market. That’s why we pay close attention to what they think in small-cap stocks. In this article, we take a closer look at Capstead Mortgage Corporation (NYSE:CMO) from the perspective of those elite funds.

There was quite a large decline in hedge fund ownership of Capstead Mortgage during Q2 ahead of the stock hitting 5-year lows in October. Israel Englander’s Millennium Management and Cliff Asness’ AQR Capital were among the hedge funds to sell off their CMO positions, as hedge fund ownership fell by 40% during Q2. Capstead shares may have finally hit rock bottom, as evidenced by Director Christopher W. Mahowald’s insider purchase of 75,000 shares on October 29, the first insider purchase by the company’s management team in five years (it ranked 15th on our countdown of The 25 Biggest Insider Purchases in October).

In the eyes of most investors, hedge funds are seen as unimportant, outdated investment tools of the past. While there are over 8,000 funds trading today, our researchers hone in on the top tier of this group, about 700 funds. These hedge fund managers oversee the bulk of the hedge fund industry’s total asset base, and by following their best stock picks, Insider Monkey has formulated a number of investment strategies that have historically beaten Mr. Market. Insider Monkey’s small-cap hedge fund strategy outstripped the S&P 500 index by 12 percentage points a year for a decade in back tests.

What have hedge funds been doing with Capstead Mortgage Corporation (NYSE:CMO)? 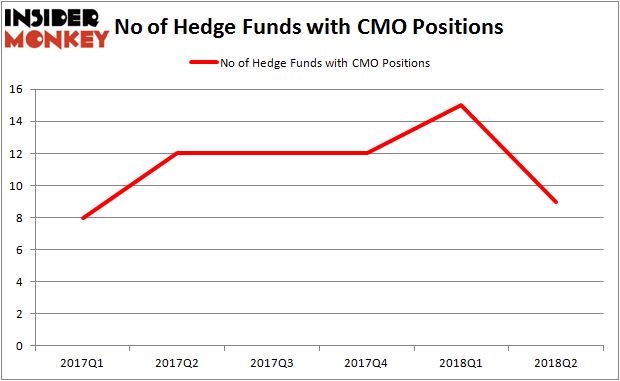 Quant fund Renaissance Technologies, founded by billionaire Jim Simons, held the most valuable stake in Capstead Mortgage Corporation (NYSE:CMO), worth $20.6 million at the end of the second quarter. On the second spot was Citadel Investment Group which had amassed $12.2 million worth of shares. Moreover, Ellington, Weiss Asset Management, and Tudor Investment Corp were also bullish on Capstead Mortgage Corporation (NYSE:CMO), allocating a large percentage of their portfolios to this stock.

Since Capstead Mortgage Corporation (NYSE:CMO) has witnessed declining sentiment from the smart money, it’s easy to see that there were a few fund managers who were dropping their entire stakes last quarter. At the top of the heap, Israel Englander’s Millennium Management cut the biggest investment of the “upper crust” of funds watched by Insider Monkey, comprising close to $5 million in stock, and Cliff Asness’ AQR Capital Management was right behind this move, as the fund sold off about $579,000 worth. These bearish behaviors are intriguing to say the least, as total hedge fund interest was cut by six funds last quarter.

As you can see these stocks had an average of 11 hedge funds with bullish positions and the average amount invested in these stocks was $192 million. That figure was $35.8 million in CMO’s case. Star Bulk Carriers is the most popular stock in this table. On the other hand German American Bancorp is the least popular one with only 5 bullish hedge fund positions, though it did gain three of those during Q2. Compared to these stocks, hedge funds aren’t nearly as confident in Capstead Mortgage. However, given the more recent bullishness by insiders and the fact that shares are near 5-year lows, it could be worth looking into this stock further.