Even though Adecoagro SA (NYSE:AGRO), Caesars Acquisition Company (NASDAQ:CACQ), Rovi Corporation (NASDAQ:ROVI), Gaming and Leisure Properties Inc (NASDAQ:GLPI) may seem like a random group of stocks, there is a reason why you might be interested in taking a closer look at them. One thing that these four companies have in common is that legendary billionaire George Soros is bullish on them and owns significant amounts of their stocks.

Billionaire George Soros’ Soros Fund Management is one of the most notorious funds in the US, whose stock picks are watched closely and scrutinized. Earlier this year, George Soros returned to trading and to manage his fund more actively, seeing opportunities to profit from possible near-term economic troubles. Soros Fund Management owns a pretty large equity portfolio, which was worth $4.67 billion at the end of June. Over 40% of the portfolio was allocated towards technology stocks, followed by financial and consumer discretionary companies, which represented 28% and 19% of the equity portfolio, respectively.

According to our calculations, Soros Fund Management’s equity portfolio generated a weighted average return of 13.3% during the third quarter, based on the fund’s 108 positions in companies worth at least $1.0 billion. Having said that, let’s take a closer look at the four stocks that ranked among the fund’s top picks heading into the third quarter.

Adecoagro SA (NYSE:AGRO)’s stock inched up by 4% during the third quarter, while Soros had entered the period with an $130.73 million position that contained 11.92 million shares, down by 14% over the quarter. Overall, there were 24 funds from our database long Adecoagro at the end of June, compared to 29 funds a quarter earlier. Among these funds, Soros held the largest stake and was followed by spraie Management which amassed $100.3 millions worth of shares. Moreover, EMS Capital, Point State Capital, and Renaissance Technologies were also bullish on Adecoagro SA (NYSE:AGRO). 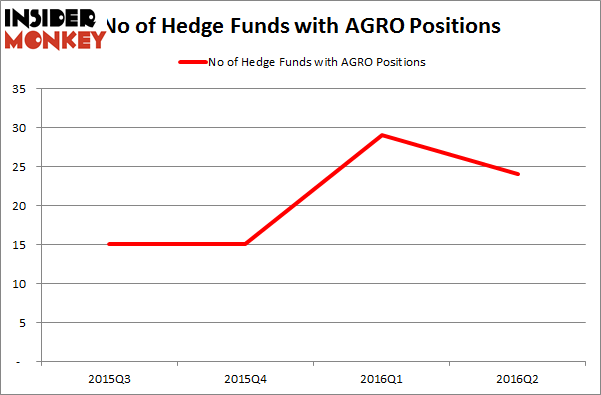 In Caesars Acquisition Company (NASDAQ:CACQ), Soros had held 6.51 million shares worth $73.04 million at the end of June and saw the stock advance by 10.7% during the third quarter. Among the funds we track, the number of investors bullish on Caesars Acquisition Company remained unchanged at 13 during the second quarter. More specifically, John Paulson’s Paulson & Co. held the largest stake, which was worth $147.4 million at the end of June. ome other professional money managers that hold long positions consist of Matthew Knauer and Mina Faltas’s Nokota Management, Joshua Friedman and Mitchell Julis’s Canyon Capital Advisors and Jose Fernandez’s Stepstone Group.

Rovi Corporation (NASDAQ:ROVI) represented one of Soros’ best investments, as the stock surged by 43.4% between July and September. The fund had initiated a stake during the previous quarter, having reported ownership of 4.07 million shares worth $63.60 million as of the end of June. In this way, Soros was one of 22 funds that held shares of Rovi Corporation at the end of the second quarter, down by two funds over the quarter. Following Soros, which was the largest shareholder, was Driehaus Capital, led by Richard Driehaus, holding a $47.2 million position. Other members of the smart money with similar optimism contain Glenn W. Welling’s Engaged Capital, John Overdeck and David Siegel’s Two Sigma Advisors and David Costen Haley’s HBK Investments.