The stock market has been on a wild ride since the start of the year, with the Dow last week topping 14,000 for the first time since 2007,  only to give back some of those gains earlier this week . However, discount retail stocks haven’t participated in the stock market’s peaks lately. Specifically, dollar store stocks, such as Family Dollar Stores, Inc. (NYSE:FDO), Dollar Tree, Inc. (NASDAQ:DLTR), and Dollar General Corp. (NYSE:DG) have been consistently declining since last year.

Let’s dig deeper to find out what’s in store for discounters in 2013, and how investors should trade these names going forward.

The value of a dollar store
Dollar store stocks have fallen out of favor with investors lately as a result of slowing sales growth and shrinking margins . In fact, of the three companies mentioned above, Dollar General is the only stock that is up so far this year, with a gain of about 3%.  Meanwhile, Family Dollar is down more than 10 % year to date, followed by a more manageable 2% decline in shares of Dollar Tree .

This is a dramatic reversal from just a few years ago, when sales at these companies during the recession climbed higher along with their stocks . Over the past five years, all of these stocks have risen more than 100%, as you can see in the chart below. This trend is shifting, however, and some analysts worry that increased competition from big box discounters like Wal-Mart Stores, Inc. (NYSE:WMT) and Target Corporation (NYSE:TGT) could push the dollar stocks lower from here. 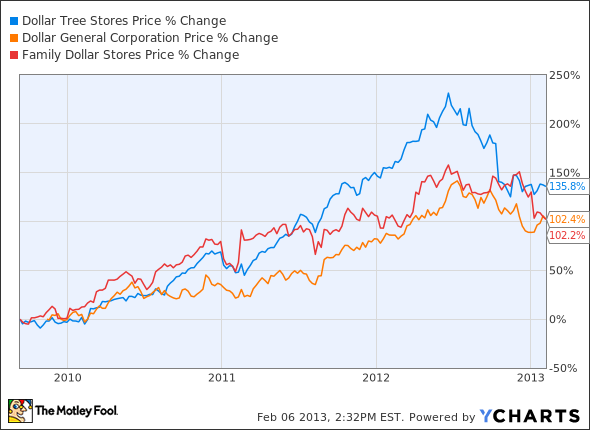 “Wal-Mart says it is spending $1 billion a year to lower prices in part to lure those customers back” from stores like Family Dollar and Dollar General,” according to the  Wall Street Journal. Similar to dollar stores, both Wal-Mart and Target sell groceries at most of their locations. The idea is to get more customers through the doors on a regular basis.

Both Family Dollar and Dollar General have continued to beef up their food offerings over the past two years . However, this strategy could do more harm than good because of the especially low-margin nature of the grocery business. Last month, Family Dollar blamed strong food sales for its disappointing quarterly earnings .

2013 will mark another growth milestone as we plan to open the organization’s 11,000th store before the year’s end .

With the highest returns to date, Dollar General appears to be the clear winner among the dollar store chains. However, the company’s rapid expansion could hurt near-term profitability.

As a result of margin pressures and increased competition, dollar store stocks will likely continue to be volatile in the year ahead. That’s why investors may want to look elsewhere for market beating returns.

The article Should You Dump These Discount Retail Stocks? originally appeared on Fool.com and is written by Tamara Rutter.

Fool contributor Tamara Rutter owns shares of Target. The Motley Fool has no position in any of the stocks mentioned.