The elite funds run by legendary investors such as Dan Loeb and David Tepper make hundreds of millions of dollars for themselves and their investors by spending enormous resources doing research on small cap stocks that big investment banks don’t follow. Because of their pay structures, they have strong incentive to do the research necessary to beat the market. That’s why we pay close attention to what they think in small cap stocks. In this article, we take a closer look at WESCO International, Inc. (NYSE:WCC) from the perspective of those elite funds.

Hedge fund interest in WESCO International, Inc. (NYSE:WCC) shares was flat at the end of last quarter. This is usually a negative indicator. The level and the change in hedge fund popularity aren’t the only variables you need to analyze to decipher hedge funds’ perspectives. A stock may witness a boost in popularity but it may still be less popular than similarly priced stocks. That’s why at the end of this article we will examine companies such as Corrections Corp Of America (NYSE:CXW), Norbord Inc. (NYSE:OSB), and Tempur Sealy International Inc. (NYSE:TPX) to gather more data points.

To the average investor there are many signals shareholders have at their disposal to analyze publicly traded companies. A couple of the most underrated signals are hedge fund and insider trading indicators. Our experts have shown that, historically, those who follow the best picks of the top money managers can outclass their index-focused peers by a significant amount (see the details here).

How have hedgies been trading WESCO International, Inc. (NYSE:WCC)?

At the end of the third quarter, a total of 26 of the hedge funds tracked by Insider Monkey were long this stock, no change from one quarter earlier. The graph below displays the number of hedge funds with bullish position in WCC over the last 13 quarters. With the smart money’s positions undergoing their usual ebb and flow, there exists an “upper tier” of key hedge fund managers who were increasing their stakes considerably (or already accumulated large positions). 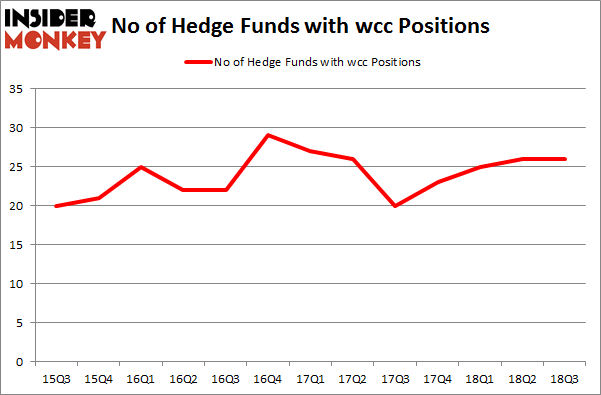 Among these funds, Blue Harbour Group held the most valuable stake in WESCO International, Inc. (NYSE:WCC), which was worth $216.1 million at the end of the third quarter. On the second spot was Carlson Capital which amassed $60 million worth of shares. Moreover, AQR Capital Management, Polaris Capital Management, and D E Shaw were also bullish on WESCO International, Inc. (NYSE:WCC), allocating a large percentage of their portfolios to this stock.

Seeing as WESCO International, Inc. (NYSE:WCC) has faced bearish sentiment from the smart money, it’s safe to say that there lies a certain “tier” of hedge funds that decided to sell off their positions entirely by the end of the third quarter. Intriguingly, Doug Gordon, Jon Hilsabeck and Don Jabro’s Shellback Capital cut the biggest stake of the “upper crust” of funds monitored by Insider Monkey, valued at an estimated $8.1 million in stock. Robert Pohly’s fund, Samlyn Capital, also dumped its stock, about $2.2 million worth. These bearish behaviors are interesting, as aggregate hedge fund interest stayed the same (this is a bearish signal in our experience).

As you can see these stocks had an average of 16.25 hedge funds with bullish positions and the average amount invested in these stocks was $428 million. That figure was $505 million in WCC’s case. Tempur Sealy International Inc. (NYSE:TPX) is the most popular stock in this table. On the other hand Norbord Inc. (NYSE:OSB) is the least popular one with only 10 bullish hedge fund positions. WESCO International, Inc. (NYSE:WCC) is not the most popular stock in this group but hedge fund interest is still above average. This is a slightly positive signal but we’d rather spend our time researching stocks that hedge funds are piling on. In this regard TPX might be a better candidate to consider a long position.