“Value has performed relatively poorly since the 2017 shift, but we believe challenges to the S&P 500’s dominance are mounting and resulting active opportunities away from the index are growing. At some point, this fault line will break, likely on the back of rising rates, and all investors will be reminded that the best time to diversify away from the winners is when it is most painful. The bargain of capturing long-term value may be short-term pain, but enough is eventually enough and it comes time to harvest the benefits.,” said Clearbridge Investments in its market commentary. We aren’t sure whether long-term interest rates will top 5% and value stocks outperform growth, but we follow hedge fund investor letters to understand where the markets and stocks might be going. That’s why we believe it would be worthwhile to take a look at the hedge fund sentiment on Washington Federal Inc. (NASDAQ:WAFD) in order to identify whether reputable and successful top money managers continue to believe in its potential.

Hedge fund interest in Washington Federal Inc. (NASDAQ:WAFD) shares was flat at the end of last quarter. This is usually a negative indicator. The level and the change in hedge fund popularity aren’t the only variables you need to analyze to decipher hedge funds’ perspectives. A stock may witness a boost in popularity but it may still be less popular than similarly priced stocks. That’s why at the end of this article we will examine companies such as Fox Factory Holding Corp (NASDAQ:FOXF), Medifast, Inc. (NYSE:MED), and Seritage Growth Properties (NYSE:SRG) to gather more data points.

What does the smart money think about Washington Federal Inc. (NASDAQ:WAFD)?

Heading into the fourth quarter of 2018, a total of 13 of the hedge funds tracked by Insider Monkey held long positions in this stock, no change from the second quarter of 2018. The graph below displays the number of hedge funds with bullish position in WAFD over the last 13 quarters. With the smart money’s capital changing hands, there exists an “upper tier” of key hedge fund managers who were boosting their holdings considerably (or already accumulated large positions). 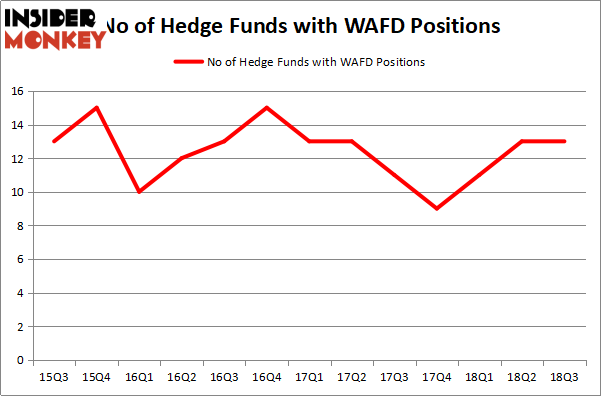 The largest stake in Washington Federal Inc. (NASDAQ:WAFD) was held by Arrowstreet Capital, which reported holding $19.3 million worth of stock at the end of September. It was followed by GLG Partners with a $15.5 million position. Other investors bullish on the company included Renaissance Technologies, Millennium Management, and D E Shaw.

Seeing as Washington Federal Inc. (NASDAQ:WAFD) has witnessed a decline in interest from the aggregate hedge fund industry, it’s safe to say that there exists a select few money managers who were dropping their entire stakes by the end of the third quarter. At the top of the heap, Breogan Vazquez’s Breogan Capital dumped the largest position of the 700 funds monitored by Insider Monkey, totaling an estimated $2 million in stock. John Overdeck and David Siegel’s fund, Two Sigma Advisors, also dropped its stock, about $0.5 million worth. These moves are intriguing to say the least, as total hedge fund interest stayed the same (this is a bearish signal in our experience).

As you can see these stocks had an average of 13.75 hedge funds with bullish positions and the average amount invested in these stocks was $239 million. That figure was $74 million in WAFD’s case. Medifast, Inc. (NYSE:MED) is the most popular stock in this table. On the other hand Xenia Hotels & Resorts Inc (NYSE:XHR) is the least popular one with only 9 bullish hedge fund positions. Washington Federal Inc. (NASDAQ:WAFD) is not the least popular stock in this group but hedge fund interest is still below average. This is a slightly negative signal and we’d rather spend our time researching stocks that hedge funds are piling on. In this regard MED might be a better candidate to consider a long position.