The government requires hedge funds and wealthy investors with over a certain portfolio size to file a report that shows their positions at the end of every quarter. Even though it isn’t the intention, these filings level the playing field for ordinary investors. The latest round of 13F filings disclosed the funds’ positions on September 30. We at Insider Monkey have made an extensive database of more than 700 of those elite funds and prominent investors’ filings. In this article, we analyze how these elite funds and prominent investors traded Voya Financial Inc (NYSE:VOYA) based on those filings.

Is Voya Financial Inc (NYSE:VOYA) a healthy stock for your portfolio? Money managers are in a bullish mood. The number of bullish hedge fund positions inched up by 2 lately. Our calculations also showed that voya isn’t among the 30 most popular stocks among hedge funds. VOYA was in 38 hedge funds’ portfolios at the end of September. There were 36 hedge funds in our database with VOYA positions at the end of the previous quarter.

What have hedge funds been doing with Voya Financial Inc (NYSE:VOYA)?

Heading into the fourth quarter of 2018, a total of 38 of the hedge funds tracked by Insider Monkey held long positions in this stock, a change of 6% from the second quarter of 2018. By comparison, 37 hedge funds held shares or bullish call options in VOYA heading into this year. With the smart money’s sentiment swirling, there exists a select group of notable hedge fund managers who were boosting their stakes considerably (or already accumulated large positions). 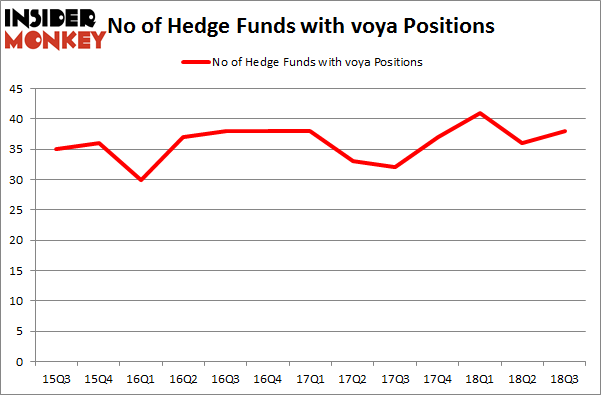 Among these funds, Pzena Investment Management held the most valuable stake in Voya Financial Inc (NYSE:VOYA), which was worth $500.4 million at the end of the third quarter. On the second spot was Citadel Investment Group which amassed $183.9 million worth of shares. Moreover, Millennium Management, D E Shaw, and Greenlight Capital were also bullish on Voya Financial Inc (NYSE:VOYA), allocating a large percentage of their portfolios to this stock.

As industrywide interest jumped, key money managers have been driving this bullishness. Marshall Wace LLP, managed by Paul Marshall and Ian Wace, created the most outsized position in Voya Financial Inc (NYSE:VOYA). Marshall Wace LLP had $26.5 million invested in the company at the end of the quarter. Peter Rathjens, Bruce Clarke and John Campbell’s Arrowstreet Capital also initiated a $18 million position during the quarter. The other funds with new positions in the stock are Nick Niell’s Arrowgrass Capital Partners, Ian Simm’s Impax Asset Management, and Ron Bobman’s Capital Returns Management.