Should You Buy VMware, Inc. (VMW)?

The government requires hedge funds and wealthy investors with over a certain portfolio size to file a report that shows their positions at the end of every quarter. Even though it isn’t the intention, these filings level the playing field for ordinary investors. The latest round of 13F filings disclosed the funds’ positions on September 30. We at Insider Monkey have made an extensive database of more than 700 of those elite funds and prominent investors’ filings. In this article, we analyze how these elite funds and prominent investors traded VMware, Inc. (NYSE:VMW) based on those filings.

VMware, Inc. (NYSE:VMW) shareholders have witnessed an increase in support from the world’s most elite money managers lately. Our calculations also showed that VMW isn’t among the 30 most popular stocks among hedge funds.

What does the smart money think about VMware, Inc. (NYSE:VMW)?

At the end of the third quarter, a total of 38 of the hedge funds tracked by Insider Monkey were long this stock, a change of 3% from the second quarter of 2018. Below, you can check out the change in hedge fund sentiment towards VMW over the last 13 quarters. So, let’s find out which hedge funds were among the top holders of the stock and which hedge funds were making big moves. 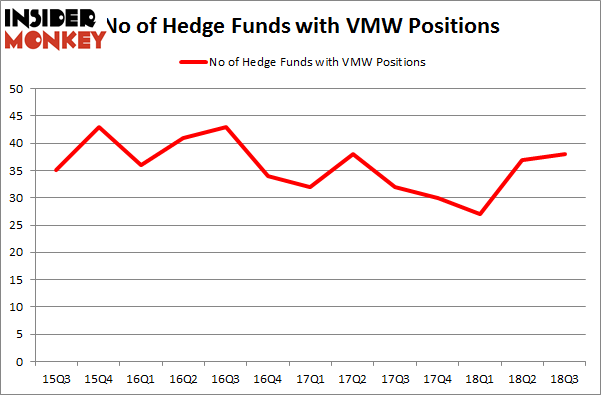 According to Insider Monkey’s hedge fund database, Jim Simons’s Renaissance Technologies has the number one position in VMware, Inc. (NYSE:VMW), worth close to $801.6 million, accounting for 0.8% of its total 13F portfolio. Coming in second is D. E. Shaw of D E Shaw, with a $320.4 million position; 0.4% of its 13F portfolio is allocated to the stock. Some other professional money managers with similar optimism contain Josh Resnick’s Jericho Capital Asset Management, John Overdeck and David Siegel’s Two Sigma Advisors and Cliff Asness’s AQR Capital Management.

As you can see these stocks had an average of 52.5 hedge funds with bullish positions and the average amount invested in these stocks was $4.77 billion. That figure was $2.37 billion in VMW’s case. Activision Blizzard, Inc. (NASDAQ:ATVI) is the most popular stock in this table. On the other hand PNC Financial Services Group Inc. (NYSE:PNC) is the least popular one with only 40 bullish hedge fund positions. Compared to these stocks VMware, Inc. (NYSE:VMW) is even less popular than PNC. Considering that hedge funds aren’t fond of this stock in relation to other companies analyzed in this article, it may be a good idea to analyze it in detail and understand why the smart money isn’t behind this stock. This isn’t necessarily bad news. Although it is possible that hedge funds may think the stock is overpriced and view the stock as a short candidate, they may not be very familiar with the bullish thesis. In either case more research is warranted.