Should You Buy Trecora Resources (TREC)?

Trecora Resources (NYSE:TREC) shares haven’t seen a lot of action during the third quarter. Overall, hedge fund sentiment was unchanged. The stock was in 6 hedge funds’ portfolios at the end of September. At the end of this article we will also compare TREC to other stocks including America First Multifamily Investors, L.P. (NASDAQ:ATAX), Diebold Nixdorf Incorporated (NYSE:DBD), and MagnaChip Semiconductor Corporation (NYSE:MX) to get a better sense of its popularity.

What does the smart money think about Trecora Resources (NYSE:TREC)?

At the end of the third quarter, a total of 6 of the hedge funds tracked by Insider Monkey held long positions in this stock, representing no change from one quarter earlier. By comparison, 7 hedge funds held shares or bullish call options in TREC heading into this year. So, let’s examine which hedge funds were among the top holders of the stock and which hedge funds were making big moves. 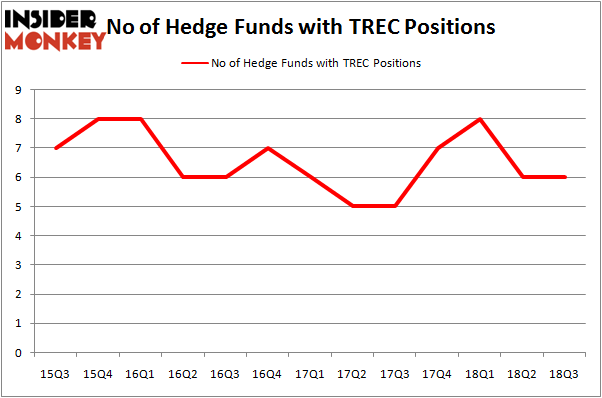 Among these funds, Royce & Associates held the most valuable stake in Trecora Resources (NYSE:TREC), which was worth $7.2 million at the end of the third quarter. On the second spot was Brigade Capital which amassed $7.2 million worth of shares. Moreover, Rutabaga Capital Management, Renaissance Technologies, and Wynnefield Capital were also bullish on Trecora Resources (NYSE:TREC), allocating a large percentage of their portfolios to this stock.

As you can see these stocks had an average of 9.5 hedge funds with bullish positions and the average amount invested in these stocks was $65 million. That figure was $23 million in TREC’s case. MagnaChip Semiconductor Corporation (NYSE:MX) is the most popular stock in this table. On the other hand America First Multifamily Investors, L.P. (NASDAQ:ATAX) is the least popular one with only 1 bullish hedge fund positions. Trecora Resources (NYSE:TREC) is not the least popular stock in this group but hedge fund interest is still below average. This is a slightly negative signal and we’d rather spend our time researching stocks that hedge funds are piling on. In this regard MX might be a better candidate to consider a long position.