Does Tower Semiconductor Ltd. (NASDAQ:TSEM) represent a good buying opportunity at the moment? Let’s briefly check the hedge fund interest towards the company. Hedge fund firms constantly search out bright intellectuals and highly-experienced employees and throw away millions of dollars on research activities, so it is no wonder why they tend to generate millions in profits each year. It is also true that some hedge fund players fail unconceivably on some occasions, but their stock picks have been generating superior risk-adjusted returns on average over the years.

Tower Semiconductor Ltd. (NASDAQ:TSEM) shares haven’t seen a lot of action during the third quarter. Overall, hedge fund sentiment was unchanged. The stock was in 13 hedge funds’ portfolios at the end of September. At the end of this article we will also compare TSEM to other stocks including trivago N.V. (NASDAQ:TRVG), Tanger Factory Outlet Centers Inc. (NYSE:SKT), and Argo Group International Holdings, Ltd. (NYSE:ARGO) to get a better sense of its popularity.

If you’d ask most shareholders, hedge funds are perceived as underperforming, old investment vehicles of years past. While there are greater than 8,000 funds with their doors open at the moment, Our experts choose to focus on the leaders of this club, about 700 funds. These hedge fund managers manage the lion’s share of all hedge funds’ total capital, and by watching their inimitable equity investments, Insider Monkey has discovered a few investment strategies that have historically exceeded the S&P 500 index. Insider Monkey’s flagship hedge fund strategy outstripped the S&P 500 index by 6 percentage points a year since its inception in May 2014 through early November 2018. We were able to generate large returns even by identifying short candidates. Our portfolio of short stocks lost 24% since February 2017 (through December 3rd) even though the market was up nearly 23% during the same period. We just shared a list of 11 short targets in our latest quarterly update. 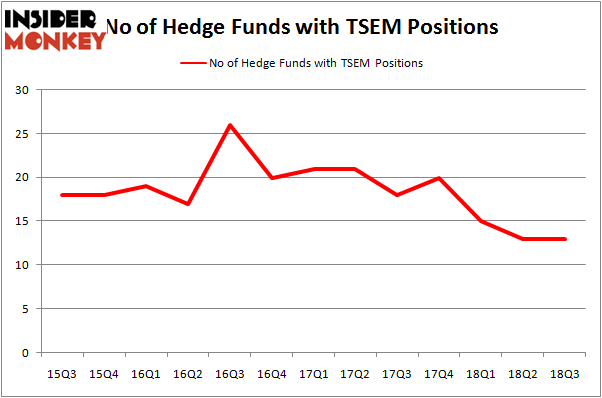 The largest stake in Tower Semiconductor Ltd. (NASDAQ:TSEM) was held by Rima Senvest Management, which reported holding $150.2 million worth of stock at the end of September. It was followed by Moab Capital Partners with a $77.5 million position. Other investors bullish on the company included D E Shaw, Two Sigma Advisors, and Renaissance Technologies.

Judging by the fact that Tower Semiconductor Ltd. (NASDAQ:TSEM) has experienced bearish sentiment from the entirety of the hedge funds we track, it’s safe to say that there is a sect of hedge funds that elected to cut their entire stakes in the third quarter. Intriguingly, Israel Englander’s Millennium Management sold off the largest investment of all the hedgies watched by Insider Monkey, valued at an estimated $12.8 million in stock. Glenn Russell Dubin’s fund, Highbridge Capital Management, also dumped its stock, about $0.5 million worth. These moves are interesting, as total hedge fund interest stayed the same (this is a bearish signal in our experience).

As you can see these stocks had an average of 14.5 hedge funds with bullish positions and the average amount invested in these stocks was $113 million. That figure was $287 million in TSEM’s case. Cooper-Standard Holdings Inc (NYSE:CPS) is the most popular stock in this table. On the other hand trivago N.V. (NASDAQ:TRVG) is the least popular one with only 9 bullish hedge fund positions. Tower Semiconductor Ltd. (NASDAQ:TSEM) is not the least popular stock in this group but hedge fund interest is still below average. This is a slightly negative signal and we’d rather spend our time researching stocks that hedge funds are piling on. In this regard CPS might be a better candidate to consider a long position.

Hedge Funds Are Crazy About Steven Madden, Ltd. (SHOO)
Monthly Newsletter Strategy
Download a free copy of our newsletter and see the details inside!
Hedge Fund Resource Center
Related News
35 Fresh Stories That You Should Read To Know How The Financial Markets Are Doing Today Is Tower Semiconductor Ltd. (USA) (TSEM) A Good Stock To Buy Right Now? Are Investors Right To Be Bullish On Deckers Outdoor Corp (DECK), Tower Semiconductor Ltd. (TSEM), More? Here’s Why These Five Stocks Are on the Move on Thursday RIMA Senvest Grows Even More Bullish On Top Holdings Here’s Why These 4 Stocks Made Big Moves Thursday Is Tower Semiconductor Ltd. (USA) (TSEM) a Good Buy? 10 Best Vacation Spots for Singles in Their 40’s 15 Highest Paid YouTubers of 2018 16 Good Excuses to Miss Work for a Few Days
Billionaire Hedge Funds