Titan International Inc (NYSE:TWI) was in 13 hedge funds’ portfolios at the end of the third quarter of 2018. TWI has experienced an increase in support from the world’s most elite money managers lately. There were 12 hedge funds in our database with TWI positions at the end of the previous quarter. Our calculations also showed that TWI isn’t among the 30 most popular stocks among hedge funds.

What does the smart money think about Titan International Inc (NYSE:TWI)? 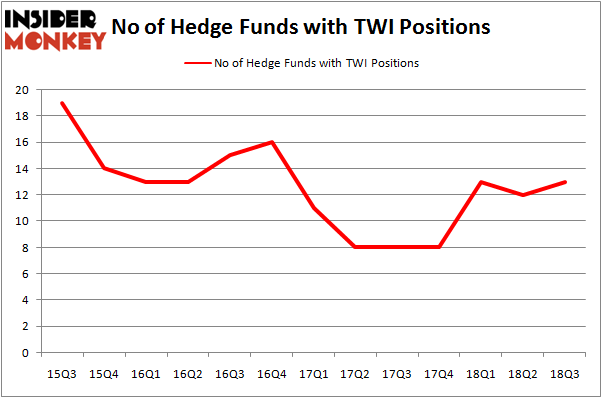 According to publicly available hedge fund and institutional investor holdings data compiled by Insider Monkey, Mark Rachesky’s MHR Fund Management has the most valuable position in Titan International Inc (NYSE:TWI), worth close to $59.4 million, amounting to 3.2% of its total 13F portfolio. The second most bullish fund manager is Jim Simons of Renaissance Technologies, with a $21 million position; the fund has less than 0.1%% of its 13F portfolio invested in the stock. Remaining professional money managers with similar optimism include Chuck Royce’s Royce & Associates, Robert Hockett’s Covalent Capital Partners and Israel Englander’s Millennium Management.

As you can see these stocks had an average of 11 hedge funds with bullish positions and the average amount invested in these stocks was $47 million. That figure was $90 million in TWI’s case. A10 Networks Inc (NYSE:ATEN) is the most popular stock in this table. On the other hand MFS Intermediate Income Trust (NYSE:MIN) is the least popular one with only 2 bullish hedge fund positions. Titan International Inc (NYSE:TWI) is not the most popular stock in this group but hedge fund interest is still above average. This is a slightly positive signal but we’d rather spend our time researching stocks that hedge funds are piling on. In this regard ATEN might be a better candidate to consider a long position.