A whopping number of 13F filings filed with U.S. Securities and Exchange Commission has been processed by Insider Monkey so that individual investors can look at the overall hedge fund sentiment towards the stocks included in their watchlists. These freshly-submitted public filings disclose money managers’ equity positions as of the end of the three-month period that ended September 30, so let’s proceed with the discussion of the hedge fund sentiment on Standex Int’l Corp. (NYSE:SXI).

Standex Int’l Corp. (NYSE:SXI) shares didn’t see a lot of action during the third quarter. Overall, hedge fund sentiment was unchanged. The stock was in 10 hedge funds’ portfolios at the end of the third quarter of 2016. The level and the change in hedge fund popularity aren’t the only variables you need to analyze to decipher hedge funds’ perspectives. A stock may witness a boost in popularity but it may still be less popular than similarly priced stocks. That’s why at the end of this article we will examine companies such as Benefitfocus Inc (NASDAQ:BNFT), Medpace Holdings Inc (NASDAQ:MEDP), and Nextera Energy Partners LP (NYSE:NEP) to gather more data points. 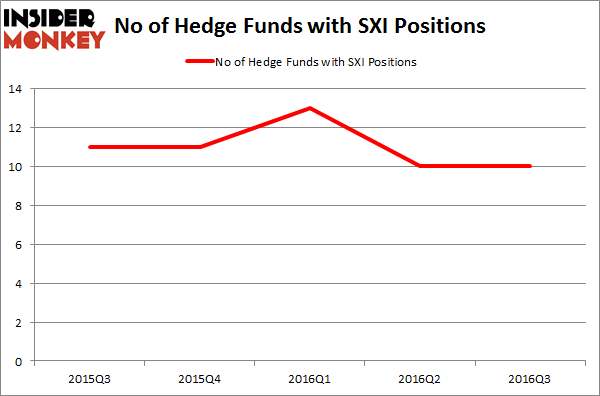 According to Insider Monkey’s hedge fund database, AQR Capital Management, led by Cliff Asness, holds the number one position in Standex Int’l Corp. (NYSE:SXI). AQR Capital Management has a $7.1 million position in the stock. The second largest stake is held by GAMCO Investors, led by Mario Gabelli, which holds a $6.6 million position. Some other hedge funds and institutional investors that are bullish include Chuck Royce’s Royce & Associates, Renaissance Technologies, one of the largest hedge funds in the world and John Overdeck and David Siegel’s Two Sigma Advisors. We should note that none of these hedge funds are among our list of the 100 best performing hedge funds which is based on the performance of their 13F long positions in non-microcap stocks.

Bonus Biotech Stock Pick: You can also find a detailed bonus biotech stock pick that we expect to return more than 50% within 12 months.
We may use your email to send marketing emails about our services. Click here to read our privacy policy.
Related Insider Monkey Articles
Do Hedge Funds and Insiders Love CIRCOR International, Inc. (CIR)?