Regal Beloit Corporation (NYSE:RBC) shareholders have witnessed an increase in hedge fund interest recently. Our calculations also showed that rbc isn’t among the 30 most popular stocks among hedge funds.

At Q3’s end, a total of 17 of the hedge funds tracked by Insider Monkey were bullish on this stock, a change of 31% from one quarter earlier. On the other hand, there were a total of 16 hedge funds with a bullish position in RBC at the beginning of this year. With the smart money’s sentiment swirling, there exists an “upper tier” of noteworthy hedge fund managers who were adding to their stakes significantly (or already accumulated large positions). 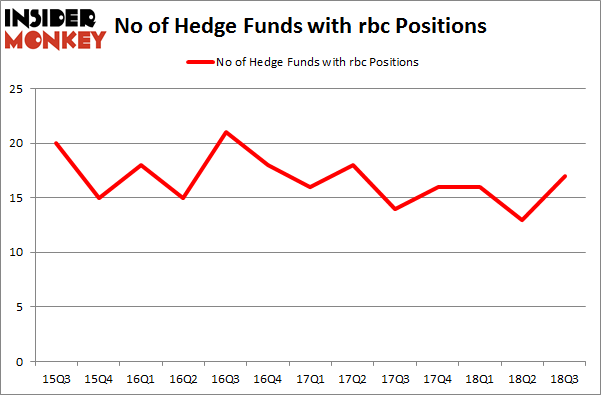 Among these funds, Fisher Asset Management held the most valuable stake in Regal Beloit Corporation (NYSE:RBC), which was worth $56.4 million at the end of the third quarter. On the second spot was GLG Partners which amassed $18 million worth of shares. Moreover, Point72 Asset Management, AQR Capital Management, and D E Shaw were also bullish on Regal Beloit Corporation (NYSE:RBC), allocating a large percentage of their portfolios to this stock.

With a general bullishness amongst the heavyweights, some big names were breaking ground themselves. Point72 Asset Management, managed by Steve Cohen, initiated the biggest position in Regal Beloit Corporation (NYSE:RBC). Point72 Asset Management had $13.2 million invested in the company at the end of the quarter. John D. Gillespie’s Prospector Partners also initiated a $3.5 million position during the quarter. The following funds were also among the new RBC investors: Lee Ainslie’s Maverick Capital, Jim Simons’s Renaissance Technologies, and Matthew Tewksbury’s Stevens Capital Management.

As you can see these stocks had an average of 20.25 hedge funds with bullish positions and the average amount invested in these stocks was $357 million. That figure was $115 million in RBC’s case. Navient Corp (NASDAQ:NAVI) is the most popular stock in this table. On the other hand Liberty Latin America Ltd. (NASDAQ:LILA) is the least popular one with only 11 bullish hedge fund positions. Regal Beloit Corporation (NYSE:RBC) is not the least popular stock in this group but hedge fund interest is still below average. This is a slightly negative signal and we’d rather spend our time researching stocks that hedge funds are piling on. In this regard NAVI might be a better candidate to consider a long position.