Should You Buy Redfin Corporation (RDFN)?

The 700+ hedge funds and money managers tracked by Insider Monkey have already compiled and submitted their 13F filings for the second quarter, which unveil their equity positions as of September 30. We went through these filings, fixed typos and other more significant errors and identified the changes in hedge fund positions. Our extensive review of these public filings is finally over, so this article is set to reveal the smart money sentiment towards Redfin Corporation (NASDAQ:RDFN).

Is Redfin Corporation (NASDAQ:RDFN) going to take off soon? Prominent investors are in a bullish mood. The number of bullish hedge fund positions moved up by 4 lately. Our calculations also showed that rdfn isn’t among the 30 most popular stocks among hedge funds. RDFN was in 12 hedge funds’ portfolios at the end of the third quarter of 2018. There were 8 hedge funds in our database with RDFN holdings at the end of the previous quarter.

What does the smart money think about Redfin Corporation (NASDAQ:RDFN)? 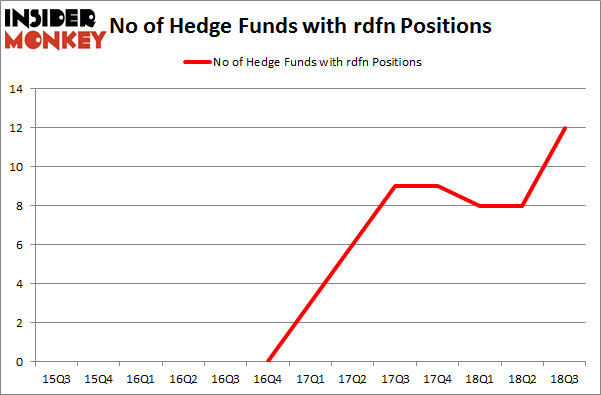 More specifically, Immersion Capital was the largest shareholder of Redfin Corporation (NASDAQ:RDFN), with a stake worth $45.8 million reported as of the end of September. Trailing Immersion Capital was Tiger Global Management LLC, which amassed a stake valued at $44 million. Ancient Art (Teton Capital), Foxhaven Asset Management, and Clough Capital Partners were also very fond of the stock, giving the stock large weights in their portfolios.

As industrywide interest jumped, some big names were leading the bulls’ herd. Immersion Capital, managed by Michael Sidhom, established the most valuable position in Redfin Corporation (NASDAQ:RDFN). Immersion Capital had $45.8 million invested in the company at the end of the quarter. Michael Pausic’s Foxhaven Asset Management also initiated a $8.9 million position during the quarter. The other funds with new positions in the stock are Charles Clough’s Clough Capital Partners, Seymour Sy Kaufman and Michael Stark’s Crosslink Capital, and Leon Shaulov’s Maplelane Capital.

Let’s now take a look at hedge fund activity in other stocks – not necessarily in the same industry as Redfin Corporation (NASDAQ:RDFN) but similarly valued. We will take a look at Ship Finance International Limited (NYSE:SFL), Apptio, Inc. (NASDAQ:APTI), Cosan Limited (NYSE:CZZ), and Fresh Del Monte Produce Inc (NYSE:FDP). All of these stocks’ market caps are similar to RDFN’s market cap.

As you can see these stocks had an average of 16 hedge funds with bullish positions and the average amount invested in these stocks was $131 million. That figure was $146 million in RDFN’s case. Apptio, Inc. (NASDAQ:APTI) is the most popular stock in this table. On the other hand Ship Finance International Limited (NYSE:SFL) is the least popular one with only 12 bullish hedge fund positions. Compared to these stocks Redfin Corporation (NASDAQ:RDFN) is even less popular than SFL. Considering that hedge funds aren’t fond of this stock in relation to other companies analyzed in this article, it may be a good idea to analyze it in detail and understand why the smart money isn’t behind this stock. This isn’t necessarily bad news. Although it is possible that hedge funds may think the stock is overpriced and view the stock as a short candidate, they may not be very familiar with the bullish thesis. In either case more research is warranted.