Is PRA Health Sciences Inc (NASDAQ:PRAH) a cheap investment now? Prominent investors are in a bullish mood. The number of bullish hedge fund bets improved by 3 in recent months. Our calculations also showed that PRAH isn’t among the 30 most popular stocks among hedge funds. PRAH was in 28 hedge funds’ portfolios at the end of the third quarter of 2018. There were 25 hedge funds in our database with PRAH positions at the end of the previous quarter.

In the eyes of most shareholders, hedge funds are perceived as slow, old financial vehicles of years past. While there are over 8,000 funds with their doors open today, We choose to focus on the moguls of this club, about 700 funds. It is estimated that this group of investors command most of the smart money’s total asset base, and by keeping an eye on their finest stock picks, Insider Monkey has uncovered many investment strategies that have historically outstripped Mr. Market. Insider Monkey’s flagship hedge fund strategy beat the S&P 500 index by 6 percentage points per annum since its inception in May 2014 through early November 2018. We were able to generate large returns even by identifying short candidates. Our portfolio of short stocks lost 24% since February 2017 (through December 3rd) even though the market was up nearly 23% during the same period. We just shared a list of 11 short targets in our latest quarterly update.

How have hedgies been trading PRA Health Sciences Inc (NASDAQ:PRAH)?

At Q3’s end, a total of 28 of the hedge funds tracked by Insider Monkey held long positions in this stock, a change of 12% from one quarter earlier. Below, you can check out the change in hedge fund sentiment towards PRAH over the last 13 quarters. So, let’s find out which hedge funds were among the top holders of the stock and which hedge funds were making big moves. 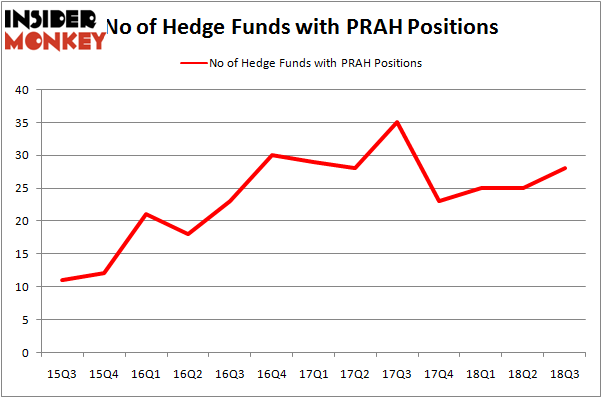 Of the funds tracked by Insider Monkey, Brian Ashford-Russell and Tim Woolley’s Polar Capital has the largest position in PRA Health Sciences Inc (NASDAQ:PRAH), worth close to $54.5 million, comprising 0.5% of its total 13F portfolio. Coming in second is Laurion Capital Management, led by Benjamin A. Smith, holding a $53.3 million position; the fund has 0.5% of its 13F portfolio invested in the stock. Some other peers that are bullish include Kris Jenner, Gordon Bussard, Graham McPhail’s Rock Springs Capital Management, Jeremy Green’s Redmile Group and Israel Englander’s Millennium Management.

As you can see these stocks had an average of 18.25 hedge funds with bullish positions and the average amount invested in these stocks was $157 million. That figure was $276 million in PRAH’s case. Ionis Pharmaceuticals, Inc. (NASDAQ:IONS) is the most popular stock in this table. On the other hand Commerce Bancshares, Inc. (NASDAQ:CBSH) is the least popular one with only 12 bullish hedge fund positions. Compared to these stocks PRA Health Sciences Inc (NASDAQ:PRAH) is more popular among hedge funds. Considering that hedge funds are fond of this stock in relation to its market cap peers, it may be a good idea to analyze it in detail and potentially include it in your portfolio.