Should You Buy or Sell Rackspace Hosting, Inc. (RAX) Today?

The stock plunged 18% on Wednesday, making it one of the worst performers in the entire stock market. That’s a drastic change for a stock that had gained 38% in the previous six months and more than quadrupled in the past three years. The tide suddenly turned against a proven market darling. 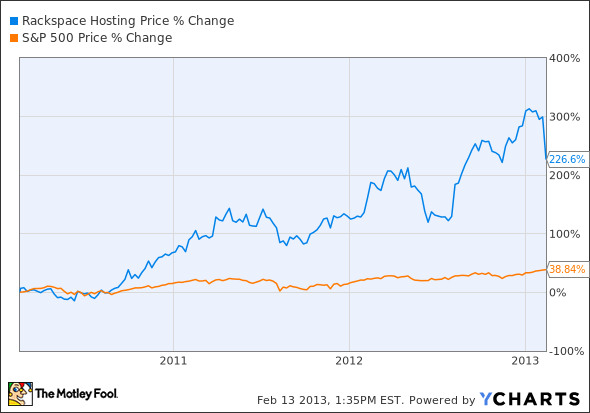 The company reported fourth-quarter results Tuesday night. Rackspace roughly met Wall Street’s revenue expectations with a $353 million top-line performance but whiffed a little bit on the bottom line, where its $0.21 of adjusted earnings per share fell $0.01 short of analyst targets.

Earnings rose 19% year over year, but that stock chart proves that investors expected more out of the virtual computing leader.

What’s wrong?
Analysts were disappointed by the lack of clarity for 2013. Rackspace didn’t offer any guidance on revenue or earnings targets, and the expected capital expenses are actually trending down from 2012 levels — hardly a sign of rambunctious growth that would require large infrastructure improvements.

The company presented Staples, Inc. (NASDAQ:SPLS) as a significant new customer, but didn’t provide any detail on the size of that deal. Chances are that the contract wasn’t very impressive, because Staples didn’t issue any press releases boasting efficiencies or cost savings from a new cloud-based IT platform. Cloud customers are prone to doing that when the upgrade really changes the game.

Uncertainty makes investors nervous, and for good reason. You shouldn’t invest in black boxes where you have no idea what to expect.

Numbers don’t tell the whole story
However, Rackspace is one of those high-growth opportunities where it’s incredibly difficult to nail down targets to the last nickel. I think it pays off to consider the larger narrative here.

CEO Lanham Napier called 2012 “a year of execution and rebuilding — a year spent in the lab” as Rackspace adopted the brand-new OpenStack infrastructure platform. By contrast, “2013 will be transformational for Rackspace,” Napier said. “We will step up and lead the Open Cloud movement while laying the foundation for massive growth ahead.”

He also zinged cloud rivals Amazon.com, Inc. (NASDAQ:AMZN) and VMware, Inc. (NYSE:VMW) for representing an obsolete way of thinking. “Amazon and VMware embraced a legacy model of using proprietary technology to lock in their customers,” he said. And now Rackspace finds that customers are looking for a new way of doing business in the cloud, with open standards and fewer proprietary systems. The sea change should start to play out this year, with the real payoff to come in 2014 and beyond.