Should You Buy ASGN Incorporated (ASGN)?

The fourth quarter was a rough one for most investors, as fears of a rising interest rate environment in the U.S, a trade war with China, and a more or less stagnant Europe, weighed heavily on the minds of investors. Both the S&P 500 and Russell 2000 sank as a result, with the Russell 2000, which is composed of smaller companies, being hit especially hard. This was primarily due to hedge funds, which are big supporters of small-cap stocks, pulling some of their capital out of the volatile markets during this time. Let’s look at how this market volatility affected the sentiment of hedge funds towards ASGN Incorporated (NYSE:ASGN), and what that likely means for the prospects of the company and its stock.

Is ASGN Incorporated (NYSE:ASGN) the right pick for your portfolio? Investors who are in the know are taking a bullish view. The number of bullish hedge fund bets increased by 4 lately. Our calculations also showed that asgn isn’t among the 30 most popular stocks among hedge funds.

At the moment there are numerous tools market participants use to analyze stocks. Two of the most underrated tools are hedge fund and insider trading moves. Our researchers have shown that, historically, those who follow the top picks of the best money managers can trounce the broader indices by a healthy amount (see the details here).

What does the smart money think about ASGN Incorporated (NYSE:ASGN)?

Heading into the fourth quarter of 2018, a total of 18 of the hedge funds tracked by Insider Monkey held long positions in this stock, a change of 29% from the previous quarter. Below, you can check out the change in hedge fund sentiment towards ASGN over the last 13 quarters. With hedgies’ sentiment swirling, there exists a few notable hedge fund managers who were increasing their stakes meaningfully (or already accumulated large positions). 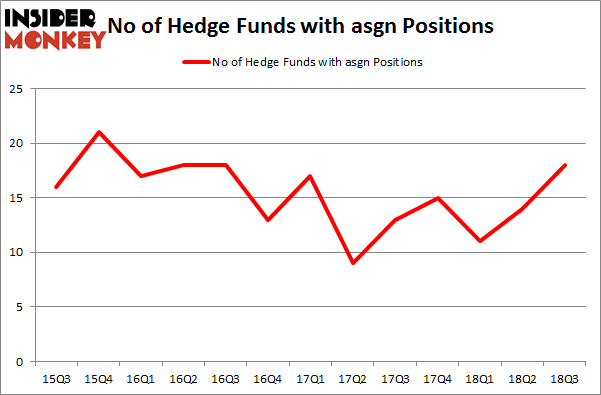 According to Insider Monkey’s hedge fund database, Israel Englander’s Millennium Management has the biggest position in ASGN Incorporated (NYSE:ASGN), worth close to $10.9 million, comprising less than 0.1%% of its total 13F portfolio. Sitting at the No. 2 spot is Royce & Associates, managed by Chuck Royce, which holds a $10 million position; 0.1% of its 13F portfolio is allocated to the stock. Some other hedge funds and institutional investors with similar optimism include Ira Unschuld’s Brant Point Investment Management, Peter Rathjens, Bruce Clarke and John Campbell’s Arrowstreet Capital and Jim Simons’s Renaissance Technologies.

Consequently, key hedge funds have jumped into ASGN Incorporated (NYSE:ASGN) headfirst. Millennium Management, managed by Israel Englander, initiated the biggest position in ASGN Incorporated (NYSE:ASGN). Millennium Management had $10.9 million invested in the company at the end of the quarter. Jim Simons’s Renaissance Technologies also made a $6.3 million investment in the stock during the quarter. The other funds with new positions in the stock are Richard Driehaus’s Driehaus Capital, D. E. Shaw’s D E Shaw, and Michael Platt and William Reeves’s BlueCrest Capital Mgmt..

As you can see these stocks had an average of 16.25 hedge funds with bullish positions and the average amount invested in these stocks was $128 million. That figure was $71 million in ASGN’s case. Vipshop Holdings Limited (NYSE:VIPS) is the most popular stock in this table. On the other hand Sabra Health Care REIT Inc (NASDAQ:SBRA) is the least popular one with only 9 bullish hedge fund positions. ASGN Incorporated (NYSE:ASGN) is not the most popular stock in this group but hedge fund interest is still above average. This is a slightly positive signal but we’d rather spend our time researching stocks that hedge funds are piling on. In this regard VIPS might be a better candidate to consider a long position.

Should You Buy The Hanover Insurance Group, Inc. (THG)?
Monthly Newsletter Strategy
Download a free copy of our newsletter and see the details inside!
Hedge Fund Resource Center
Related News
CEO-CFO Duo at U.S. Building Supplier Sell Shares After Agreeing to be Acquired by Australia’s Boral, Plus Other Insider Trading Activity Amid Slowing Insider Buying Is On Assignment, Inc. (ASGN) A Good Stock To Buy? Xerox Corporation (XRX), On Assignment, Inc. (ASGN) & More: Why You Should Take a Closer Look at These Stocks Should You Avoid On Assignment, Inc. (ASGN)? Insiders Are Dumping Shares of These 3 Companies; Should Investors Be Worried? This Metric Says You Are Smart to Buy Paychex, Inc. (PAYX) Manpowergroup Inc (MAN): Hedge Funds Aren’t Crazy About It, Insider Sentiment Unchanged 11 Countries With The Worst Modern Music In The World The Top 5 Robo Advisor Apps of 2018 Five Reasons You Need a Day-Trading Mentor
Billionaire Hedge Funds