Hedge funds and large money managers usually invest with a focus on the long-term horizon and, therefore, short-lived dips on the charts, usually don’t make them change their opinion towards a company. This time it may be different. During the first 6 weeks of the fourth quarter we observed increased volatility and small-cap stocks underperformed the market. Hedge fund investor letters indicated that they are cutting their overall exposure, closing out some position and doubling down on others. Let’s take a look at the hedge fund sentiment towards Nu Skin Enterprises, Inc. (NYSE:NUS) to find out whether it was one of their high conviction long-term ideas.

Nu Skin Enterprises, Inc. (NYSE:NUS) shares haven’t seen a lot of action during the third quarter. Overall, hedge fund sentiment was unchanged. The stock was in 18 hedge funds’ portfolios at the end of the third quarter of 2018. At the end of this article we will also compare NUS to other stocks including Umpqua Holdings Corp (NASDAQ:UMPQ), IBERIABANK Corporation (NASDAQ:IBKC), and Jabil Inc. (NYSE:JBL) to get a better sense of its popularity.

What have hedge funds been doing with Nu Skin Enterprises, Inc. (NYSE:NUS)?

At Q3’s end, a total of 18 of the hedge funds tracked by Insider Monkey held long positions in this stock, no change from the second quarter of 2018. By comparison, 16 hedge funds held shares or bullish call options in NUS heading into this year. With hedgies’ capital changing hands, there exists a few noteworthy hedge fund managers who were upping their holdings meaningfully (or already accumulated large positions). 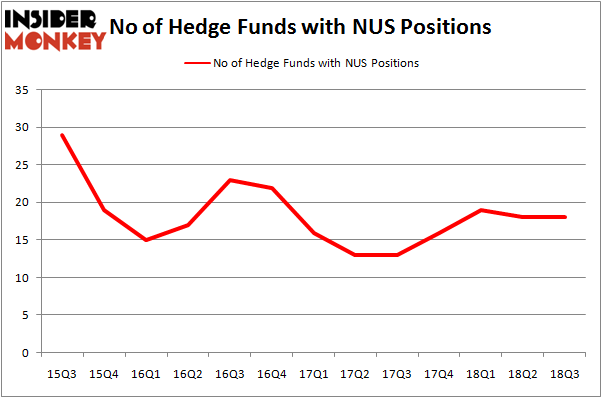 The largest stake in Nu Skin Enterprises, Inc. (NYSE:NUS) was held by AQR Capital Management, which reported holding $126.9 million worth of stock at the end of September. It was followed by Renaissance Technologies with a $67.2 million position. Other investors bullish on the company included D E Shaw, Arrowstreet Capital, and Point72 Asset Management.

Due to the fact that Nu Skin Enterprises, Inc. (NYSE:NUS) has experienced falling interest from the entirety of the hedge funds we track, it’s safe to say that there was a specific group of funds that decided to sell off their entire stakes by the end of the third quarter. At the top of the heap, Noam Gottesman’s GLG Partners sold off the biggest investment of the 700 funds watched by Insider Monkey, valued at close to $1.7 million in stock. Mike Vranos’s fund, Ellington, also sold off its stock, about $0.5 million worth. These moves are intriguing to say the least, as aggregate hedge fund interest stayed the same (this is a bearish signal in our experience).

As you can see these stocks had an average of 22.25 hedge funds with bullish positions and the average amount invested in these stocks was $327 million. That figure was $301 million in NUS’s case. OneMain Holdings Inc (NYSE:OMF) is the most popular stock in this table. On the other hand Umpqua Holdings Corp (NASDAQ:UMPQ) is the least popular one with only 20 bullish hedge fund positions. Compared to these stocks Nu Skin Enterprises, Inc. (NYSE:NUS) is even less popular than UMPQ. Considering that hedge funds aren’t fond of this stock in relation to other companies analyzed in this article, it may be a good idea to analyze it in detail and understand why the smart money isn’t behind this stock. This isn’t necessarily bad news. Although it is possible that hedge funds may think the stock is overpriced and view the stock as a short candidate, they may not be very familiar with the bullish thesis. In either case more research is warranted.