Should You Buy NeoPhotonics Corp (NPTN)?

As we already know from media reports and hedge fund investor letters, many hedge funds lost money in October, blaming macroeconomic conditions and unpredictable events that hit several sectors, with healthcare among them. Nevertheless, most investors decided to stick to their bullish theses and their long-term focus allows us to profit from the recent declines. In particular, let’s take a look at what hedge funds think about NeoPhotonics Corp (NYSE:NPTN) in this article.

Hedge fund interest in NeoPhotonics Corp (NYSE:NPTN) shares was flat at the end of last quarter. This is usually a negative indicator. At the end of this article we will also compare NPTN to other stocks including American Software, Inc. (NASDAQ:AMSWA), Digimarc Corp (NASDAQ:DMRC), and Jernigan Capital Inc (NYSE:JCAP) to get a better sense of its popularity.

Heading into the fourth quarter of 2018, a total of 10 of the hedge funds tracked by Insider Monkey held long positions in this stock, representing no change from the second quarter of 2018. By comparison, 13 hedge funds held shares or bullish call options in NPTN heading into this year. With hedge funds’ positions undergoing their usual ebb and flow, there exists an “upper tier” of key hedge fund managers who were upping their holdings meaningfully (or already accumulated large positions). 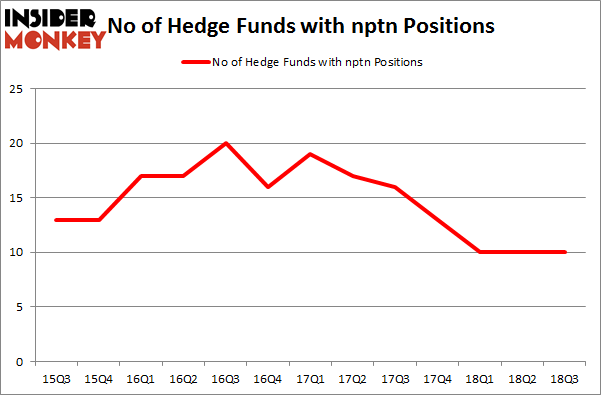 More specifically, Royce & Associates was the largest shareholder of NeoPhotonics Corp (NYSE:NPTN), with a stake worth $20.3 million reported as of the end of September. Trailing Royce & Associates was Masters Capital Management, which amassed a stake valued at $16.6 million. Millennium Management, Citadel Investment Group, and Boardman Bay Capital Management were also very fond of the stock, giving the stock large weights in their portfolios.

We view hedge fund activity in the stock unfavorable, but in this case there was only a single hedge fund selling its entire position: Levin Capital Strategies. One hedge fund selling its entire position doesn’t always imply a bearish intent. Theoretically a hedge fund may decide to sell a promising position in order to invest the proceeds in a more promising idea. However, we don’t think this is the case in this case because only one of the 800+ hedge funds tracked by Insider Monkey identified as a viable investment and initiated a position in the stock (that fund was D E Shaw).

As you can see these stocks had an average of 6 hedge funds with bullish positions and the average amount invested in these stocks was $27 million. That figure was $60 million in NPTN’s case. Jernigan Capital Inc (NYSE:JCAP) is the most popular stock in this table. On the other hand Digimarc Corp (NASDAQ:DMRC) is the least popular one with only 2 bullish hedge fund positions. NeoPhotonics Corp (NYSE:NPTN) is not the most popular stock in this group but hedge fund interest is still above average. This is a slightly positive signal but we’d rather spend our time researching stocks that hedge funds are piling on. In this regard JCAP might be a better candidate to consider a long position.