MedEquities Realty Trust, Inc. (NYSE:MRT) has seen an increase in hedge fund sentiment in recent months. MRT was in 12 hedge funds’ portfolios at the end of September. There were 10 hedge funds in our database with MRT holdings at the end of the previous quarter. Our calculations also showed that mrt isn’t among the 30 most popular stocks among hedge funds.

What does the smart money think about MedEquities Realty Trust, Inc. (NYSE:MRT)?

At the end of the third quarter, a total of 12 of the hedge funds tracked by Insider Monkey held long positions in this stock, a change of 20% from the previous quarter. Below, you can check out the change in hedge fund sentiment towards MRT over the last 13 quarters. So, let’s examine which hedge funds were among the top holders of the stock and which hedge funds were making big moves. 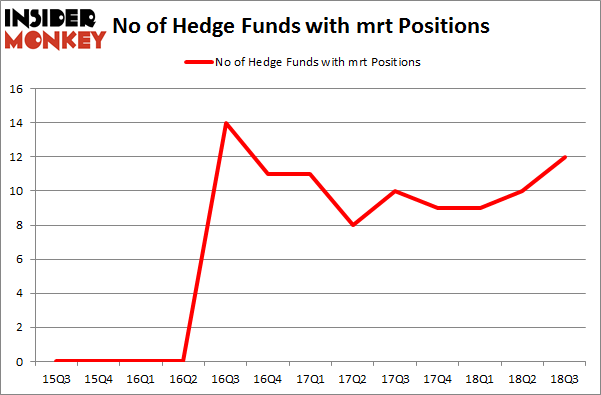 According to Insider Monkey’s hedge fund database, Andrew Feldstein and Stephen Siderow’s Blue Mountain Capital has the most valuable position in MedEquities Realty Trust, Inc. (NYSE:MRT), worth close to $21.3 million, accounting for 0.4% of its total 13F portfolio. Sitting at the No. 2 spot is Jim Simons of Renaissance Technologies, with a $9.9 million position; less than 0.1%% of its 13F portfolio is allocated to the company. Remaining peers that are bullish include Alexander Medina Seaver’s Stadium Capital Management, Noam Gottesman’s GLG Partners and Dmitry Balyasny’s Balyasny Asset Management.

As one would reasonably expect, specific money managers were breaking ground themselves. Zebra Capital Management, managed by Roger Ibbotson, established the most valuable position in MedEquities Realty Trust, Inc. (NYSE:MRT). Zebra Capital Management had $0.1 million invested in the company at the end of the quarter. Gavin Saitowitz and Cisco J. del Valle’s Springbok Capital also initiated a $0.1 million position during the quarter.

As you can see these stocks had an average of 4.75 hedge funds with bullish positions and the average amount invested in these stocks was $25 million. That figure was $42 million in MRT’s case. Capital Southwest Corporation (NASDAQ:CSWC) is the most popular stock in this table. On the other hand VelocityShares 3x Long Silver ETN (NASDAQ:USLV) is the least popular one with only 2 bullish hedge fund positions. Compared to these stocks MedEquities Realty Trust, Inc. (NYSE:MRT) is more popular among hedge funds. Considering that hedge funds are fond of this stock in relation to its market cap peers, it may be a good idea to analyze it in detail and potentially include it in your portfolio.