We at Insider Monkey have gone over 700 13F filings that hedge funds and prominent investors are required to file by the SEC. The 13F filings show the funds’ and investors’ portfolio positions as of September 30th. In this article, we look at what those investors think of Liberty Global Plc (NASDAQ:LBTYK).

Liberty Global Plc (NASDAQ:LBTYK) was in 41 hedge funds’ portfolios at the end of the third quarter of 2018. LBTYK shareholders have witnessed an increase in hedge fund sentiment lately. There were 40 hedge funds in our database with LBTYK holdings at the end of the previous quarter. Our calculations also showed that LBTYK isn’t among the 30 most popular stocks among hedge funds.

How have hedgies been trading Liberty Global Plc (NASDAQ:LBTYK)? 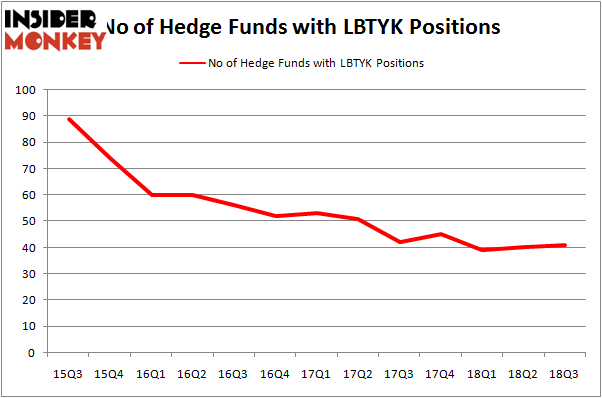 More specifically, Eagle Capital Management was the largest shareholder of Liberty Global Plc (NASDAQ:LBTYK), with a stake worth $1100.5 million reported as of the end of September. Trailing Eagle Capital Management was SPO Advisory Corp, which amassed a stake valued at $459.9 million. Baupost Group, Berkshire Hathaway, and Farallon Capital were also very fond of the stock, giving the stock large weights in their portfolios.

As one would reasonably expect, some big names have been driving this bullishness. Baupost Group, managed by Seth Klarman, established the most outsized position in Liberty Global Plc (NASDAQ:LBTYK). Baupost Group had $303.3 million invested in the company at the end of the quarter. Scott Wallace’s Wallace Capital Management also made a $30 million investment in the stock during the quarter. The other funds with new positions in the stock are Thomas Bailard’s Bailard Inc, Matthew Hulsizer’s PEAK6 Capital Management, and Frederick DiSanto’s Ancora Advisors.

As you can see these stocks had an average of 41.75 hedge funds with bullish positions and the average amount invested in these stocks was $1313 million. That figure was $3980 million in LBTYK’s case. CBS Corporation (NYSE:CBS) is the most popular stock in this table. On the other hand, IDEXX Laboratories, Inc. (NASDAQ:IDXX) is the least popular one with only 35 bullish hedge fund positions. Liberty Global Plc (NASDAQ:LBTYK) is not the least popular stock in this group but hedge fund interest is still below average. This is a slightly negative signal and we’d rather spend our time researching stocks that hedge funds are piling on. In this regard, CBS might be a better candidate to consider a long position.