Is Ionis Pharmaceuticals, Inc. (NASDAQ:IONS) the right investment to pursue these days? The best stock pickers are in an optimistic mood. The number of bullish hedge fund bets rose by 3 lately. Our calculations also showed that IONS isn’t among the 30 most popular stocks among hedge funds.

In the 21st century investor’s toolkit there are many indicators shareholders have at their disposal to value their holdings. A couple of the best indicators are hedge fund and insider trading sentiment. Our researchers have shown that, historically, those who follow the top picks of the top investment managers can outpace the market by a superb amount (see the details here). 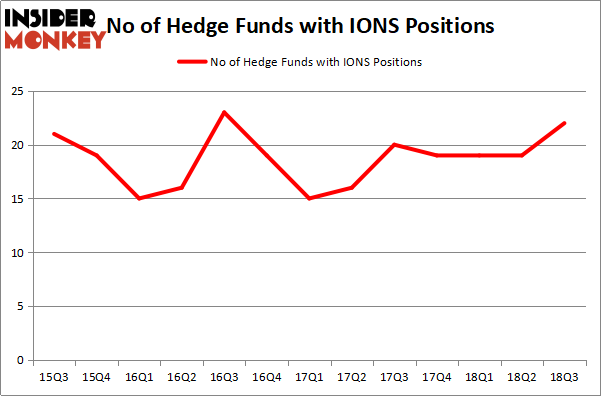 Among these funds, Biotechnology Value Fund / BVF Inc held the most valuable stake in Ionis Pharmaceuticals, Inc. (NASDAQ:IONS), which was worth $26.8 million at the end of the third quarter. On the second spot was PDT Partners which amassed $20.2 million worth of shares. Moreover, Two Sigma Advisors, Citadel Investment Group, and Millennium Management were also bullish on Ionis Pharmaceuticals, Inc. (NASDAQ:IONS), allocating a large percentage of their portfolios to this stock.

With a general bullishness amongst the heavyweights, key money managers have been driving this bullishness. Point72 Asset Management, managed by Steve Cohen, initiated the largest position in Ionis Pharmaceuticals, Inc. (NASDAQ:IONS). Point72 Asset Management had $4.4 million invested in the company at the end of the quarter. Oleg Nodelman’s EcoR1 Capital also made a $3.7 million investment in the stock during the quarter. The following funds were also among the new IONS investors: Gavin Saitowitz and Cisco J. del Valle’s Springbok Capital, Michael Platt and William Reeves’s BlueCrest Capital Mgmt., and Paul Marshall and Ian Wace’s Marshall Wace LLP.

As you can see these stocks had an average of 15.5 hedge funds with bullish positions and the average amount invested in these stocks was $168 million. That figure was $100 million in IONS’s case. Booz Allen Hamilton Holding Corporation (NYSE:BAH) is the most popular stock in this table. On the other hand National Retail Properties, Inc. (NYSE:NNN) is the least popular one with only 11 bullish hedge fund positions. Ionis Pharmaceuticals, Inc. (NASDAQ:IONS) is not the most popular stock in this group but hedge fund interest is still above average. This is a slightly positive signal but we’d rather spend our time researching stocks that hedge funds are piling on. In this regard BAH might be a better candidate to consider a long position.