Should You Buy Harsco Corporation (HSC)?

Hedge funds are not perfect. They have their bad picks just like everyone else. Facebook, a stock hedge funds have loved, lost a third of its value since the end of July. Although hedge funds are not perfect, their consensus picks do deliver solid returns, however. Our data show the top 30 S&P 500 stocks among hedge funds at the end of September 2018 yielded an average return of 6.7% year-to-date, vs. a gain of 2.6% for the S&P 500 Index. Because hedge funds have a lot of resources and their consensus picks do well, we pay attention to what they think. In this article, we analyze what the elite funds think of Harsco Corporation (NYSE:HSC).

Harsco Corporation (NYSE:HSC) shares haven’t seen a lot of action during the third quarter. Overall, hedge fund sentiment was unchanged. The stock was in 22 hedge funds’ portfolios at the end of the third quarter of 2018. The level and the change in hedge fund popularity aren’t the only variables you need to analyze to decipher hedge funds’ perspectives. A stock may witness a boost in popularity but it may still be less popular than similarly priced stocks. That’s why at the end of this article we will examine companies such as Meredith Corporation (NYSE:MDP), BEST Inc. (NYSE:BSTI), and Callaway Golf Company (NYSE:ELY) to gather more data points. 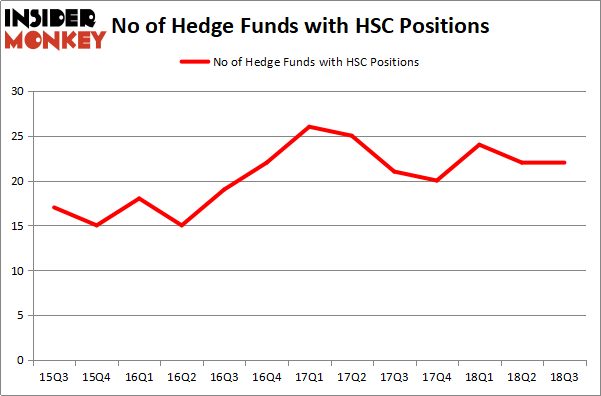 The largest stake in Harsco Corporation (NYSE:HSC) was held by SG Capital Management, which reported holding $36.7 million worth of stock at the end of September. It was followed by Adage Capital Management with a $20.1 million position. Other investors bullish on the company included 1060 Capital Management, Columbus Circle Investors, and GLG Partners.

Seeing as Harsco Corporation (NYSE:HSC) has witnessed declining sentiment from the aggregate hedge fund industry, it’s easy to see that there is a sect of hedge funds that slashed their entire stakes in the third quarter. Interestingly, Andrew Feldstein and Stephen Siderow’s Blue Mountain Capital said goodbye to the biggest investment of the “upper crust” of funds watched by Insider Monkey, worth about $0.6 million in stock. Dmitry Balyasny’s fund, Balyasny Asset Management, also said goodbye to its stock, about $0.4 million worth. These moves are interesting, as total hedge fund interest stayed the same (this is a bearish signal in our experience).

As you can see these stocks had an average of 18.75 hedge funds with bullish positions and the average amount invested in these stocks was $198 million. That figure was $134 million in HSC’s case. Callaway Golf Company (NYSE:ELY) is the most popular stock in this table. On the other hand BEST Inc. (NYSE:BSTI) is the least popular one with only 12 bullish hedge fund positions. Harsco Corporation (NYSE:HSC) is not the most popular stock in this group but hedge fund interest is still above average. This is a slightly positive signal but we’d rather spend our time researching stocks that hedge funds are piling on. In this regard ELY might be a better candidate to consider a long position.