After several tireless days we have finished crunching the numbers from the more than 700 13F filings issued by the elite hedge funds and other investment firms that we track at Insider Monkey, which disclosed those firms’ equity portfolios as of September 30. The results of that effort will be put on display in this article, as we share valuable insight into the smart money sentiment towards Grand Canyon Education Inc (NASDAQ:LOPE).

Grand Canyon Education Inc (NASDAQ:LOPE) shares haven’t seen a lot of action during the third quarter. Overall, hedge fund sentiment was unchanged. The stock was in 24 hedge funds’ portfolios at the end of September. The level and the change in hedge fund popularity aren’t the only variables you need to analyze to decipher hedge funds’ perspectives. A stock may witness a boost in popularity but it may still be less popular than similarly priced stocks. That’s why at the end of this article we will examine companies such as Medical Properties Trust, Inc. (NYSE:MPW), National Beverage Corp. (NASDAQ:FIZZ), and Webster Financial Corporation (NYSE:WBS) to gather more data points.

If you’d ask most market participants, hedge funds are viewed as worthless, outdated financial vehicles of years past. While there are greater than 8,000 funds trading today, We look at the upper echelon of this club, around 700 funds. These investment experts command bulk of the smart money’s total asset base, and by tracking their matchless equity investments, Insider Monkey has uncovered several investment strategies that have historically surpassed Mr. Market. Insider Monkey’s flagship hedge fund strategy beat the S&P 500 index by 6 percentage points annually since its inception in May 2014 through early November 2018. We were able to generate large returns even by identifying short candidates. Our portfolio of short stocks lost 24% since February 2017 (through December 3rd) even though the market was up nearly 23% during the same period. We just shared a list of 11 short targets in our latest quarterly update.

Heading into the fourth quarter of 2018, a total of 24 of the hedge funds tracked by Insider Monkey held long positions in this stock, no change from one quarter earlier. By comparison, 23 hedge funds held shares or bullish call options in LOPE heading into this year. With the smart money’s sentiment swirling, there exists a few notable hedge fund managers who were adding to their stakes significantly (or already accumulated large positions). 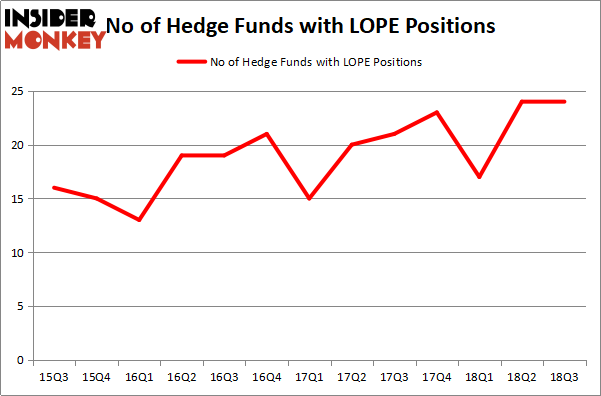 More specifically, Renaissance Technologies was the largest shareholder of Grand Canyon Education Inc (NASDAQ:LOPE), with a stake worth $118.5 million reported as of the end of September. Trailing Renaissance Technologies was D E Shaw, which amassed a stake valued at $46.4 million. Arrowstreet Capital, Millennium Management, and Two Sigma Advisors were also very fond of the stock, giving the stock large weights in their portfolios.

Seeing as Grand Canyon Education Inc (NASDAQ:LOPE) has witnessed declining sentiment from hedge fund managers, logic holds that there lies a certain “tier” of funds who sold off their full holdings last quarter. At the top of the heap, Peter Muller’s PDT Partners cut the biggest position of the 700 funds watched by Insider Monkey, worth about $8 million in stock. George Hall’s fund, Clinton Group, also dropped its stock, about $4.9 million worth. These bearish behaviors are intriguing to say the least, as aggregate hedge fund interest stayed the same (this is a bearish signal in our experience).

As you can see these stocks had an average of 15.75 hedge funds with bullish positions and the average amount invested in these stocks was $238 million. That figure was $300 million in LOPE’s case. Webster Financial Corporation (NYSE:WBS) is the most popular stock in this table. On the other hand Medical Properties Trust, Inc. (NYSE:MPW) is the least popular one with only 10 bullish hedge fund positions. Grand Canyon Education Inc (NASDAQ:LOPE) is not the most popular stock in this group but hedge fund interest is still above average. This is a slightly positive signal but we’d rather spend our time researching stocks that hedge funds are piling on. In this regard WBS might be a better candidate to consider a long position.

Is Keysight Technologies Inc (KEYS) A Good Stock To Buy?
Monthly Newsletter Strategy
Download a free copy of our newsletter and see the details inside!
Hedge Fund Resource Center
Related News
Why it May be Time to Give Education Stocks Another Chance Is Grand Canyon Education Inc (LOPE) A Good Stock To Buy? Lyon Street Capital Is Extremely Bullish on These Five Stocks Apollo Group Inc (APOL), Strayer Education Inc (STRA): Why This Company Will Change the Education Services Industry Hedge Funds Are Dumping The Washington Post Company (WPO) Should You Buy DeVry Inc. (DV)? What Hedge Funds Think About Apollo Group Inc (APOL) The 10 Best Islands to Visit in 2019 5 Most Socially Responsible Companies in America 5 Ways You Can Eliminate Credit Card Debt
Billionaire Hedge Funds