Exantas Capital Corp. (NYSE:XAN) investors should be aware of an increase in enthusiasm from smart money lately. XAN was in 15 hedge funds’ portfolios at the end of September. There were 12 hedge funds in our database with XAN positions at the end of the previous quarter. Our calculations also showed that xan isn’t among the 30 most popular stocks among hedge funds.

At Q3’s end, a total of 15 of the hedge funds tracked by Insider Monkey held long positions in this stock, a change of 25% from the previous quarter. Below, you can check out the change in hedge fund sentiment towards XAN over the last 13 quarters. With the smart money’s sentiment swirling, there exists a few noteworthy hedge fund managers who were increasing their holdings significantly (or already accumulated large positions). 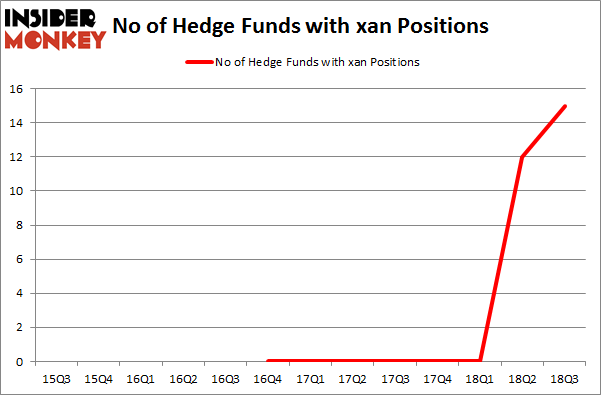 When looking at the institutional investors followed by Insider Monkey, J. Alan Reid, Jr.’s Forward Management has the largest position in Exantas Capital Corp. (NYSE:XAN), worth close to $8.9 million, accounting for 1.5% of its total 13F portfolio. The second largest stake is held by Ancora Advisors, managed by Frederick DiSanto, which holds a $7.1 million position; the fund has 0.3% of its 13F portfolio invested in the stock. Remaining members of the smart money that hold long positions include Derek C. Schrier’s Indaba Capital Management, David Costen Haley’s HBK Investments and Jim Simons’s Renaissance Technologies.

As you can see these stocks had an average of 8.5 hedge funds with bullish positions and the average amount invested in these stocks was $23 million. That figure was $45 million in XAN’s case. GNC Holdings Inc (NYSE:GNC) is the most popular stock in this table. On the other hand Landmark Infrastructure Partners LP (NASDAQ:LMRK) is the least popular one with only 4 bullish hedge fund positions. Compared to these stocks Exantas Capital Corp. (NYSE:XAN) is more popular among hedge funds. Considering that hedge funds are fond of this stock in relation to its market cap peers, it may be a good idea to analyze it in detail and potentially include it in your portfolio.