Should You Buy Enerplus Corp (ERF)?

Like everyone else, elite investors make mistakes. Some of their top consensus picks, such as Amazon, Facebook and Alibaba, have not done well in October due to various reasons. Nevertheless, the data show elite investors’ consensus picks have done well on average over the long-term. The top 30 S&P 500 stocks among hedge funds at the end of September 2018 returned an average of 6.7% through November 15th whereas the S&P 500 Index ETF gained only 2.6% during the same period. Because their consensus picks have done well, we pay attention to what elite funds think before doing extensive research on a stock. In this article, we take a closer look at Enerplus Corp (NYSE:ERF) from the perspective of those elite funds.

Enerplus Corp (NYSE:ERF) investors should be aware of an increase in enthusiasm from smart money in recent months. ERF was in 17 hedge funds’ portfolios at the end of the third quarter of 2018. There were 15 hedge funds in our database with ERF positions at the end of the previous quarter. Our calculations also showed that ERF isn’t among the 30 most popular stocks among hedge funds.

At the moment there are several gauges investors use to appraise their holdings. A couple of the most useful gauges are hedge fund and insider trading indicators. Our researchers have shown that, historically, those who follow the best picks of the best money managers can outclass the S&P 500 by a solid margin (see the details here).

Heading into the fourth quarter of 2018, a total of 17 of the hedge funds tracked by Insider Monkey were bullish on this stock, a change of 13% from the second quarter of 2018. On the other hand, there were a total of 14 hedge funds with a bullish position in ERF at the beginning of this year. With the smart money’s capital changing hands, there exists an “upper tier” of notable hedge fund managers who were adding to their holdings meaningfully (or already accumulated large positions). 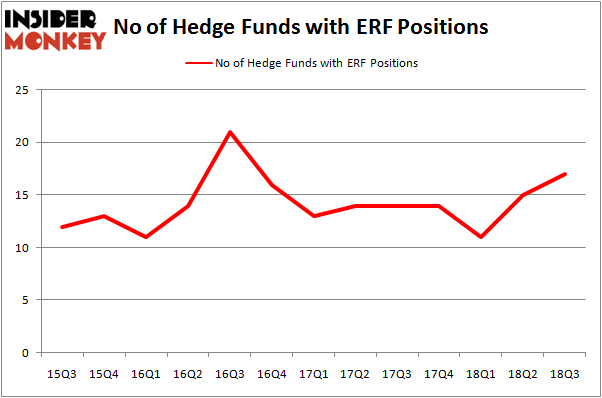 The largest stake in Enerplus Corp (NYSE:ERF) was held by Encompass Capital Advisors, which reported holding $53.5 million worth of stock at the end of September. It was followed by Cardinal Capital with a $37.9 million position. Other investors bullish on the company included Waratah Capital Advisors, SIR Capital Management, and Two Sigma Advisors.

As one would reasonably expect, key hedge funds were leading the bulls’ herd. Encompass Capital Advisors, managed by Todd J. Kantor, assembled the biggest position in Enerplus Corp (NYSE:ERF). Encompass Capital Advisors had $53.5 million invested in the company at the end of the quarter. Paul Marshall and Ian Wace’s Marshall Wace LLP also made a $3.4 million investment in the stock during the quarter. The following funds were also among the new ERF investors: Israel Englander’s Millennium Management, Jonathan Barrett and Paul Segal’s Luminus Management, and Dmitry Balyasny’s Balyasny Asset Management.

As you can see these stocks had an average of 12.25 hedge funds with bullish positions and the average amount invested in these stocks was $97 million. That figure was $175 million in ERF’s case. South State Corporation (NASDAQ:SSB) is the most popular stock in this table. On the other hand iShares MSCI ACWI ex US ETF (NASDAQ:ACWX) is the least popular one with only 7 bullish hedge fund positions. Compared to these stocks Enerplus Corp (NYSE:ERF) is more popular among hedge funds. Considering that hedge funds are fond of this stock in relation to its market cap peers, it may be a good idea to analyze it in detail and potentially include it in your portfolio.