Is Dolby Laboratories, Inc. (NYSE:DLB) a good bet right now? We like to analyze hedge fund sentiment before doing days of in-depth research. We do so because hedge funds and other elite investors have numerous Ivy league graduates, expert network advisers, and supply chain tipsters working or consulting for them. There is not a shortage of news stories covering failed hedge fund investments and it is a fact that hedge funds’ picks don’t beat the market 100% of the time, but their consensus picks have historically done very well and have outperformed the market after adjusting for risk.

Dolby Laboratories, Inc. (NYSE:DLB) shareholders have witnessed an increase in activity from the world’s largest hedge funds recently. Our calculations also showed that dlb isn’t among the 30 most popular stocks among hedge funds.

Heading into the fourth quarter of 2018, a total of 29 of the hedge funds tracked by Insider Monkey were bullish on this stock, a change of 38% from one quarter earlier. By comparison, 18 hedge funds held shares or bullish call options in DLB heading into this year. With hedge funds’ positions undergoing their usual ebb and flow, there exists a few key hedge fund managers who were adding to their stakes significantly (or already accumulated large positions). 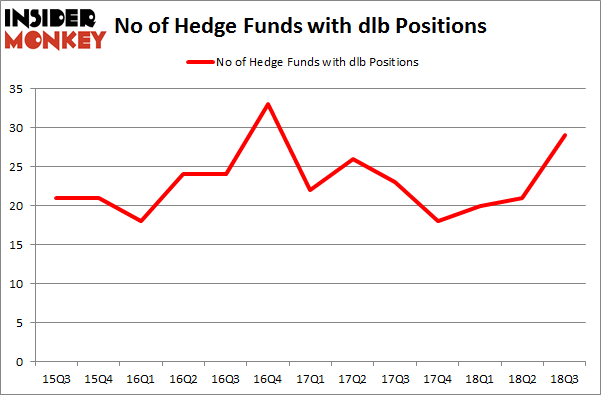 Among these funds, Renaissance Technologies held the most valuable stake in Dolby Laboratories, Inc. (NYSE:DLB), which was worth $172 million at the end of the third quarter. On the second spot was Polar Capital which amassed $146.1 million worth of shares. Moreover, MFP Investors, Nantahala Capital Management, and AQR Capital Management were also bullish on Dolby Laboratories, Inc. (NYSE:DLB), allocating a large percentage of their portfolios to this stock.

As industrywide interest jumped, key hedge funds have been driving this bullishness. BeaconLight Capital, managed by Ed Bosek, initiated the biggest position in Dolby Laboratories, Inc. (NYSE:DLB). BeaconLight Capital had $8.5 million invested in the company at the end of the quarter. Ed Bosek’s BeaconLight Capital also made a $5.1 million investment in the stock during the quarter. The following funds were also among the new DLB investors: Paul Marshall and Ian Wace’s Marshall Wace LLP, Paul Tudor Jones’s Tudor Investment Corp, and Frank Slattery’s Symmetry Peak Management.

As you can see these stocks had an average of 20.75 hedge funds with bullish positions and the average amount invested in these stocks was $355 million. That figure was $574 million in DLB’s case. Five Below Inc (NASDAQ:FIVE) is the most popular stock in this table. On the other hand Kilroy Realty Corp (NYSE:KRC) is the least popular one with only 12 bullish hedge fund positions. Compared to these stocks Dolby Laboratories, Inc. (NYSE:DLB) is more popular among hedge funds. Considering that hedge funds are fond of this stock in relation to its market cap peers, it may be a good idea to analyze it in detail and potentially include it in your portfolio.