Cott Corporation (NYSE:COT) shareholders have witnessed an increase in hedge fund sentiment lately. COT was in 25 hedge funds’ portfolios at the end of the third quarter of 2018. There were 23 hedge funds in our database with COT positions at the end of the previous quarter. Our calculations also showed that COT isn’t among the 30 most popular stocks among hedge funds. 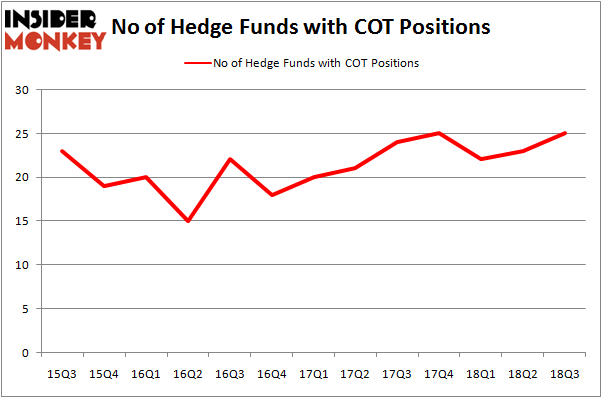 According to Insider Monkey’s hedge fund database, Steve Cohen’s Point72 Asset Management has the most valuable position in Cott Corporation (NYSE:COT), worth close to $103.3 million, comprising 0.4% of its total 13F portfolio. On Point72 Asset Management’s heels is Millennium Management, led by Israel Englander, holding a $86.6 million position; 0.1% of its 13F portfolio is allocated to the stock. Remaining members of the smart money that are bullish contain Seth Rosen’s Nitorum Capital, Claus Moller’s P2 Capital Partners and John A. Levin’s Levin Capital Strategies.

Now, key money managers have been driving this bullishness. Marshall Wace LLP, managed by Paul Marshall and Ian Wace, established the most valuable position in Cott Corporation (NYSE:COT). Marshall Wace LLP had $8 million invested in the company at the end of the quarter. Clint Murray’s Lodge Hill Capital also initiated a $5 million position during the quarter. The other funds with new positions in the stock are Mark Broach’s Manatuck Hill Partners, Matthew Hulsizer’s PEAK6 Capital Management, and Gavin Saitowitz and Cisco J. del Valle’s Springbok Capital.

As you can see these stocks had an average of 16 hedge funds with bullish positions and the average amount invested in these stocks was $155 million. That figure was $582 million in COT’s case. CONMED Corporation (NASDAQ:CNMD) is the most popular stock in this table. On the other hand Evolent Health Inc (NYSE:EVH) is the least popular one with only 13 bullish hedge fund positions. Compared to these stocks Cott Corporation (NYSE:COT) is more popular among hedge funds. Considering that hedge funds are fond of this stock in relation to its market cap peers, it may be a good idea to analyze it in detail and potentially include it in your portfolio.