How do you pick the next stock to invest in? One way would be to spend hours of research browsing through thousands of publicly traded companies. However, an easier way is to look at the stocks that smart money investors are collectively bullish on. Hedge funds and other institutional investors usually invest large amounts of capital and have to conduct due diligence while choosing their next pick. They don’t always get it right, but, on average, their stock picks historically generated strong returns after adjusting for known risk factors. With this in mind, let’s take a look at the recent hedge fund activity surrounding Commscope Holding Company Inc (NASDAQ:COMM).

Commscope Holding Company Inc (NASDAQ:COMM) investors should be aware of an increase in hedge fund interest lately. Our calculations also showed that COMM isn’t among the 30 most popular stocks among hedge funds.

What have hedge funds been doing with Commscope Holding Company Inc (NASDAQ:COMM)?

Heading into the fourth quarter of 2018, a total of 31 of the hedge funds tracked by Insider Monkey were bullish on this stock, a change of 15% from the previous quarter. Below, you can check out the change in hedge fund sentiment towards COMM over the last 13 quarters. With the smart money’s capital changing hands, there exists an “upper tier” of noteworthy hedge fund managers who were upping their stakes significantly (or already accumulated large positions). 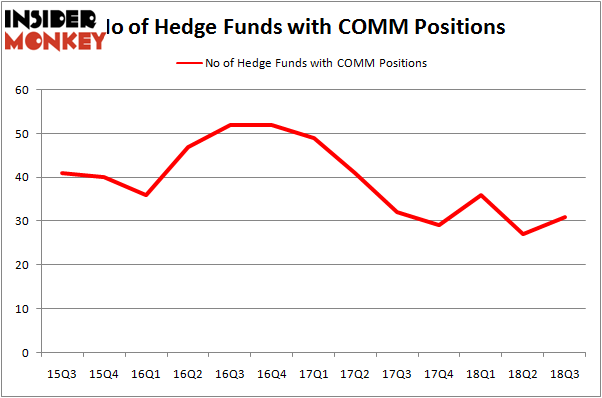 More specifically, FPR Partners was the largest shareholder of Commscope Holding Company Inc (NASDAQ:COMM), with a stake worth $285.3 million reported as of the end of September. Trailing FPR Partners was Route One Investment Company, which amassed a stake valued at $243.3 million. Maverick Capital, Chieftain Capital, and Atlantic Investment Management were also very fond of the stock, giving the stock large weights in their portfolios.

With a general bullishness amongst the heavyweights, key hedge funds were breaking ground themselves. Renaissance Technologies, managed by Jim Simons, created the biggest position in Commscope Holding Company Inc (NASDAQ:COMM). Renaissance Technologies had $11.4 million invested in the company at the end of the quarter. Andrew Feldstein and Stephen Siderow’s Blue Mountain Capital also initiated a $3.2 million position during the quarter. The other funds with new positions in the stock are Matthew Tewksbury’s Stevens Capital Management, Paul Tudor Jones’s Tudor Investment Corp, and Alec Litowitz and Ross Laser’s Magnetar Capital.

As you can see these stocks had an average of 22.25 hedge funds with bullish positions and the average amount invested in these stocks was $318 million. That figure was $1.23 billion in COMM’s case. PacWest Bancorp (NASDAQ:PACW) is the most popular stock in this table. On the other hand Healthequity Inc (NASDAQ:HQY) is the least popular one with only 15 bullish hedge fund positions. Compared to these stocks Commscope Holding Company Inc (NASDAQ:COMM) is more popular among hedge funds. Considering that hedge funds are fond of this stock in relation to its market cap peers, it may be a good idea to analyze it in detail and potentially include it in your portfolio.