Should You Buy Carnival Corporation (CCL)?

Carnival Corporation (NYSE:CCL) has experienced an increase in hedge fund sentiment of late. CCL was in 36 hedge funds’ portfolios at the end of September. There were 29 hedge funds in our database with CCL positions at the end of the previous quarter. Our calculations also showed that CCL isn’t among the 30 most popular stocks among hedge funds.

What have hedge funds been doing with Carnival Corporation (NYSE:CCL)? 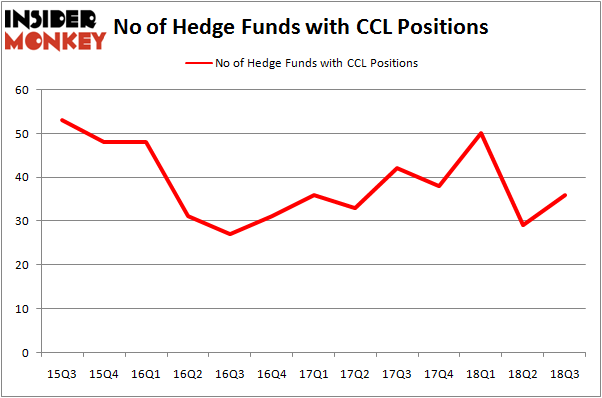 Among these funds, Two Sigma Advisors held the most valuable stake in Carnival Corporation (NYSE:CCL), which was worth $193.6 million at the end of the third quarter. On the second spot was AQR Capital Management which amassed $193.1 million worth of shares. Moreover, GLG Partners, Millennium Management, and Capital Growth Management were also bullish on Carnival Corporation (NYSE:CCL), allocating a large percentage of their portfolios to this stock.

With a general bullishness amongst the heavyweights, key money managers have jumped into Carnival Corporation (NYSE:CCL) headfirst. Point72 Asset Management, managed by Steve Cohen, assembled the most outsized position in Carnival Corporation (NYSE:CCL). Point72 Asset Management had $39.5 million invested in the company at the end of the quarter. Zach Schreiber’s Point State Capital also initiated a $29.3 million position during the quarter. The other funds with new positions in the stock are Gregg Moskowitz’s Interval Partners, and Dmitry Balyasny’s Balyasny Asset Management.

Let’s go over hedge fund activity in other stocks – not necessarily in the same industry as Carnival Corporation (NYSE:CCL) but similarly valued. We will take a look at Las Vegas Sands Corp. (NYSE:LVS), Humana Inc (NYSE:HUM), Metlife Inc (NYSE:MET), and Target Corporation (NYSE:TGT). All of these stocks’ market caps resemble CCL’s market cap.

As you can see these stocks had an average of 37 hedge funds with bullish positions and the average amount invested in these stocks was $1.92 billion. That figure was $981 million in CCL’s case. Humana Inc (NYSE:HUM) is the most popular stock in this table. On the other hand Metlife Inc (NYSE:MET) is the least popular one with only 24 bullish hedge fund positions. Carnival Corporation (NYSE:CCL) is not the least popular stock in this group but hedge fund interest is still below average. This is a slightly negative signal and we’d rather spend our time researching stocks that hedge funds are piling on. In this regard HUM might be a better candidate to consider a long position.