Like everyone else, elite investors make mistakes. Some of their top consensus picks, such as Amazon, Facebook and Alibaba, have not done well in October due to various reasons. Nevertheless, the data show elite investors’ consensus picks have done well on average over the long-term. The top 30 S&P 500 stocks among hedge funds at the end of September 2018 returned an average of 6.7% through November 15th whereas the S&P 500 Index ETF gained only 2.6% during the same period. Because their consensus picks have done well, we pay attention to what elite funds think before doing extensive research on a stock. In this article, we take a closer look at Boot Barn Holdings Inc (NYSE:BOOT) from the perspective of those elite funds.

Boot Barn Holdings Inc (NYSE:BOOT) shareholders have witnessed an increase in activity from the world’s largest hedge funds of late. Our calculations also showed that BOOT isn’t among the 30 most popular stocks among hedge funds. 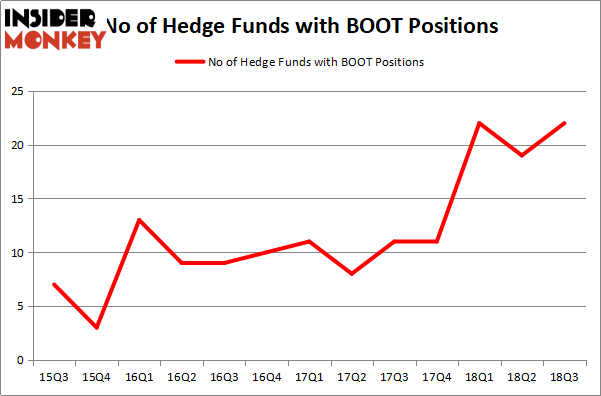 As you can see these stocks had an average of 10 hedge funds with bullish positions and the average amount invested in these stocks was $79 million. That figure was $158 million in BOOT’s case. Century Communities, Inc (NYSE:CCS) is the most popular stock in this table. On the other hand NuCana plc (NASDAQ:NCNA) is the least popular one with only 4 bullish hedge fund positions. Boot Barn Holdings Inc (NYSE:BOOT) is not the most popular stock in this group but hedge fund interest is still above average. This is a slightly positive signal but we’d rather spend our time researching stocks that hedge funds are piling on. In this regard CCS might be a better candidate to consider a long position.

Hedge Funds Are Crazy About Orbotech Ltd. (ORBK)
Monthly Newsletter Strategy
Download a free copy of our newsletter and see the details inside!
Hedge Fund Resource Center
Related News
Should You Buy Boot Barn Holdings Inc (BOOT)? Why Are These 5 Stocks Deep in the Red Today? What’s Driving Oclaro, Gilead, Eaton, Boot Barn Holdings & Viavi Higher on Wednesday? What’s the Deal With These 4 Plummeting Stocks? Five Reasons You Need a Day-Trading Mentor 15 Most Important Medical Discoveries of 2018 The 10 Best Islands to Visit in 2019
Billionaire Hedge Funds