Baytex Energy Corp (NYSE:BTE) shareholders have witnessed an increase in hedge fund interest of late. Our calculations also showed that bte isn’t among the 30 most popular stocks among hedge funds.

In the financial world there are a lot of methods market participants use to assess their holdings. A pair of the less utilized methods are hedge fund and insider trading sentiment. Our researchers have shown that, historically, those who follow the top picks of the elite hedge fund managers can outperform the broader indices by a healthy amount (see the details here).

What have hedge funds been doing with Baytex Energy Corp (NYSE:BTE)? 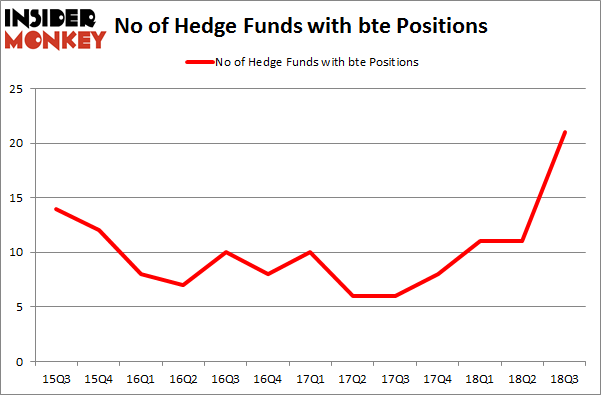 Among these funds, Encompass Capital Advisors held the most valuable stake in Baytex Energy Corp (NYSE:BTE), which was worth $25.9 million at the end of the third quarter. On the second spot was Arrowstreet Capital which amassed $17.9 million worth of shares. Moreover, Waratah Capital Advisors, Renaissance Technologies, and Point72 Asset Management were also bullish on Baytex Energy Corp (NYSE:BTE), allocating a large percentage of their portfolios to this stock.

As one would reasonably expect, some big names were leading the bulls’ herd. Encompass Capital Advisors, managed by Todd J. Kantor, initiated the biggest position in Baytex Energy Corp (NYSE:BTE). Encompass Capital Advisors had $25.9 million invested in the company at the end of the quarter. Brad Dunkley and Blair Levinsky’s Waratah Capital Advisors also made a $17.2 million investment in the stock during the quarter. The other funds with new positions in the stock are Steve Cohen’s Point72 Asset Management, Robert Emil Zoellner’s Alpine Associates, and Paul Marshall and Ian Wace’s Marshall Wace LLP.

As you can see these stocks had an average of 16.5 hedge funds with bullish positions and the average amount invested in these stocks was $111 million. That figure was $111 million in BTE’s case. Kulicke and Soffa Industries Inc. (NASDAQ:KLIC) is the most popular stock in this table. On the other hand Matthews International Corp (NASDAQ:MATW) is the least popular one with only 12 bullish hedge fund positions. Baytex Energy Corp (NYSE:BTE) is not the most popular stock in this group but hedge fund interest is still above average. This is a slightly positive signal but we’d rather spend our time researching stocks that hedge funds are piling on. In this regard KLIC might be a better candidate to consider a long position.