Looking for high-potential stocks? Just follow the big players within the hedge fund industry. Why should you do so? Let’s take a brief look at what statistics have to say about hedge funds’ stock picking abilities to illustrate. The Standard and Poor’s 500 Index returned approximately 7.6% in the 12 months ending November 21, with more than 51% of the stocks in the index failing to beat the benchmark. Therefore, the odds that one will pin down a winner by randomly picking a stock are less than the odds in a fair coin-tossing game. Conversely, best performing hedge funds’ 30 preferred mid-cap stocks generated a return of 18% during the same 12-month period. Coincidence? It might happen to be so, but it is unlikely. Our research covering a 17-year period indicates that hedge funds’ stock picks generate superior risk-adjusted returns. That’s why we believe it is wise to check hedge fund activity before you invest your time or your savings on a stock like Arowana Inc. Ordinary Shares (NASDAQ:ARWA).

Arowana Inc. Ordinary Shares (NASDAQ:ARWA) shares didn’t see a lot of action during the third quarter. Overall, hedge fund sentiment was unchanged. The stock was in 6 hedge funds’ portfolios at the end of September. At the end of this article we will also compare ARWA to other stocks including Attunity Ltd (NASDAQ:ATTU), Aurinia Pharmaceuticals Inc (NASDAQ:AUPH), and Gridsum Holding Inc – ADR (NASDAQ:GSUM) to get a better sense of its popularity.

How have hedgies been trading Arowana Inc. Ordinary Shares (NASDAQ:ARWA)?

Heading into the fourth quarter of 2016, a total of 6 of the hedge funds tracked by Insider Monkey were bullish on this stock, unchanged from one quarter earlier. On the other hand, there were a total of 6 hedge funds with a bullish position in ARWA at the beginning of this year. With the smart money’s positions undergoing their usual ebb and flow, there exists a few noteworthy hedge fund managers who were boosting their holdings significantly (or already accumulated large positions). 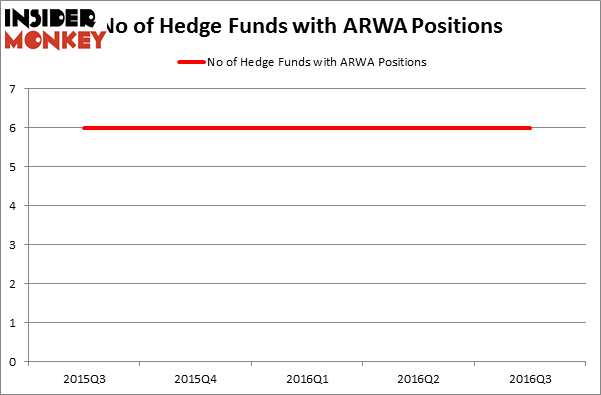 According to publicly available hedge fund and institutional investor holdings data compiled by Insider Monkey, Andrew Weiss’ Weiss Asset Management holds the most valuable position in Arowana Inc. Ordinary Shares (NASDAQ:ARWA). According to regulatory filings, the fund has a $5.6 million position in the stock, comprising 1% of its 13F portfolio. The second most bullish fund manager is Phillip Goldstein, Andrew Dakos and Steven Samuels’ Bulldog Investors, which holds a $4.1 million position. Some other professional money managers with similar optimism contain Sander Gerber’s Hudson Bay Capital Management and Paul Glazer’s Glazer Capital. We should note that Hudson Bay Capital Management is among our list of the 100 best performing hedge funds which is based on the performance of their 13F long positions in non-microcap stocks.