How do you pick the next stock to invest in? One way would be to spend hours of research browsing through thousands of publicly traded companies. However, an easier way is to look at the stocks that smart money investors are collectively bullish on. Hedge funds and other institutional investors usually invest large amounts of capital and have to conduct due diligence while choosing their next pick. They don’t always get it right, but, on average, their stock picks historically generated strong returns after adjusting for known risk factors. With this in mind, let’s take a look at the recent hedge fund activity surrounding Alamo Group, Inc. (NYSE:ALG).

Hedge fund interest in Alamo Group, Inc. (NYSE:ALG) shares was flat at the end of last quarter. This is usually a negative indicator. The level and the change in hedge fund popularity aren’t the only variables you need to analyze to decipher hedge funds’ perspectives. A stock may witness a boost in popularity but it may still be less popular than similarly priced stocks. That’s why at the end of this article we will examine companies such as GoPro Inc (NASDAQ:GPRO), Iovance Biotherapeutics, Inc. (NASDAQ:IOVA), and LGI Homes Inc (NASDAQ:LGIH) to gather more data points.

To most market participants, hedge funds are seen as slow, old investment vehicles of yesteryear. While there are greater than 8,000 funds in operation at present, Our researchers hone in on the masters of this group, approximately 700 funds. These hedge fund managers orchestrate the lion’s share of the smart money’s total capital, and by shadowing their unrivaled picks, Insider Monkey has come up with a number of investment strategies that have historically outstripped the market. Insider Monkey’s flagship hedge fund strategy outperformed the S&P 500 index by 6 percentage points annually since its inception in May 2014 through early November 2018. We were able to generate large returns even by identifying short candidates. Our portfolio of short stocks lost 24% since February 2017 (through December 3rd) even though the market was up nearly 23% during the same period. We just shared a list of 11 short targets in our latest quarterly update.

How have hedgies been trading Alamo Group, Inc. (NYSE:ALG)?

Heading into the fourth quarter of 2018, a total of 13 of the hedge funds tracked by Insider Monkey were long this stock, no change from the second quarter of 2018. On the other hand, there were a total of 12 hedge funds with a bullish position in ALG at the beginning of this year. With the smart money’s sentiment swirling, there exists an “upper tier” of notable hedge fund managers who were increasing their holdings meaningfully (or already accumulated large positions). 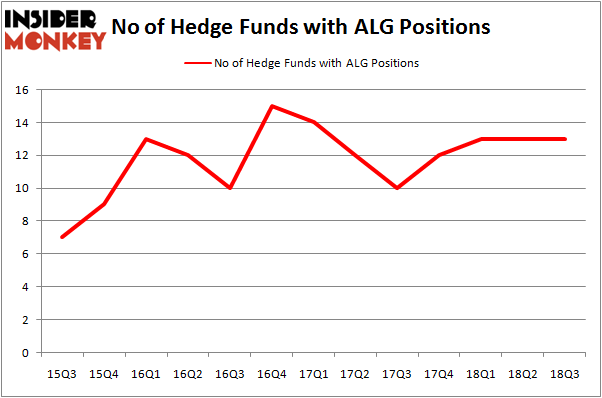 The largest stake in Alamo Group, Inc. (NYSE:ALG) was held by Longview Asset Management, which reported holding $155.7 million worth of stock at the end of September. It was followed by Royce & Associates with a $16 million position. Other investors bullish on the company included AQR Capital Management, Millennium Management, and Third Avenue Management.

We view hedge fund activity in the stock unfavorable, but in this case there was only a single hedge fund selling its entire position: Two Sigma Advisors. One hedge fund selling its entire position doesn’t always imply a bearish intent. Theoretically a hedge fund may decide to sell a promising position in order to invest the proceeds in a more promising idea. However, we don’t think this is the case in this case because only one of the 800+ hedge funds tracked by Insider Monkey identified as a viable investment and initiated a position in the stock (that fund was BlueCrest Capital Mgmt.).

As you can see these stocks had an average of 15.25 hedge funds with bullish positions and the average amount invested in these stocks was $189 million. That figure was $199 million in ALG’s case. Iovance Biotherapeutics, Inc. (NASDAQ:IOVA) is the most popular stock in this table. On the other hand Live Oak Bancshares Inc (NASDAQ:LOB) is the least popular one with only 8 bullish hedge fund positions. Alamo Group, Inc. (NYSE:ALG) is not the least popular stock in this group but hedge fund interest is still below average. This is a slightly negative signal and we’d rather spend our time researching stocks that hedge funds are piling on. In this regard IOVA might be a better candidate to consider a long position.