Should You Buy A10 Networks Inc (ATEN)?

How do you pick the next stock to invest in? One way would be to spend hours of research browsing through thousands of publicly traded companies. However, an easier way is to look at the stocks that smart money investors are collectively bullish on. Hedge funds and other institutional investors usually invest large amounts of capital and have to conduct due diligence while choosing their next pick. They don’t always get it right, but, on average, their stock picks historically generated strong returns after adjusting for known risk factors. With this in mind, let’s take a look at the recent hedge fund activity surrounding A10 Networks Inc (NYSE:ATEN).

A10 Networks Inc (NYSE:ATEN) has experienced an increase in support from the world’s most elite money managers recently. ATEN was in 15 hedge funds’ portfolios at the end of September. There were 13 hedge funds in our database with ATEN holdings at the end of the previous quarter. Our calculations also showed that ATEN isn’t among the 30 most popular stocks among hedge funds.

In the 21st century investor’s toolkit there are dozens of metrics shareholders use to size up their stock investments. Two of the most underrated metrics are hedge fund and insider trading indicators. Our experts have shown that, historically, those who follow the top picks of the top hedge fund managers can outpace the market by a significant margin (see the details here).

At Q3’s end, a total of 15 of the hedge funds tracked by Insider Monkey held long positions in this stock, a change of 15% from the second quarter of 2018. The graph below displays the number of hedge funds with bullish position in ATEN over the last 13 quarters. With the smart money’s sentiment swirling, there exists a select group of key hedge fund managers who were adding to their stakes meaningfully (or already accumulated large positions). 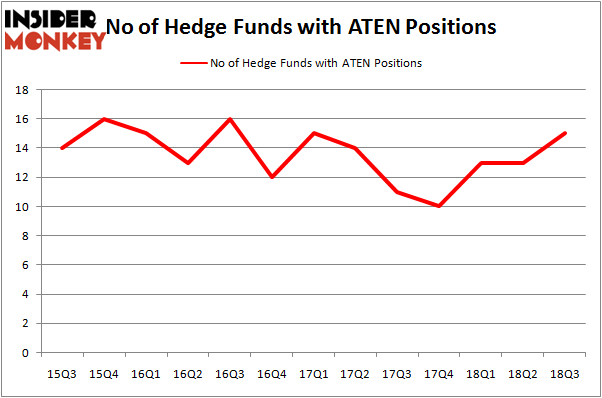 With a general bullishness amongst the heavyweights, some big names were breaking ground themselves. Arrowstreet Capital, managed by Peter Rathjens, Bruce Clarke and John Campbell, established the most outsized position in A10 Networks Inc (NYSE:ATEN). Arrowstreet Capital had $1 million invested in the company at the end of the quarter. Matthew Hulsizer’s PEAK6 Capital Management also made a $0.2 million investment in the stock during the quarter. The following funds were also among the new ATEN investors: Ken Griffin’s Citadel Investment Group and Gavin Saitowitz and Cisco J. del Valle’s Springbok Capital.

As you can see these stocks had an average of 9.5 hedge funds with bullish positions and the average amount invested in these stocks was $51 million. That figure was $57 million in ATEN’s case. OMNOVA Solutions Inc. (NYSE:OMN) is the most popular stock in this table. On the other hand First Trust High Income Long/short Fund (NYSE:FSD) is the least popular one with only 2 bullish hedge fund positions. A10 Networks Inc (NYSE:ATEN) is not the most popular stock in this group but hedge fund interest is still above average. This is a slightly positive signal but we’d rather spend our time researching stocks that hedge funds are piling on. In this regard OMN might be a better candidate to consider a long position.