Insider Monkey has processed numerous 13F filings of hedge funds and famous investors to create an extensive database of hedge fund holdings. The 13F filings show the hedge funds and investors’ positions as of the end of the third quarter. You can find write-ups about an individual hedge fund’s trades on numerous financial news websites. However, in this article we will take a look at their collective moves and analyze what the smart money thinks of Translate Bio, Inc. (NASDAQ:TBIO) based on that data.

Is Translate Bio, Inc. (NASDAQ:TBIO) the right investment to pursue these days? Investors who are in the know are taking a pessimistic view. The number of long hedge fund bets were cut by 4 recently. Our calculations also showed that TBIO isn’t among the 30 most popular stocks among hedge funds. TBIO was in 11 hedge funds’ portfolios at the end of September. There were 15 hedge funds in our database with TBIO positions at the end of the previous quarter.

To most traders, hedge funds are viewed as slow, outdated financial vehicles of the past. While there are greater than 8,000 funds with their doors open today, Our researchers choose to focus on the top tier of this club, around 700 funds. These hedge fund managers direct the majority of all hedge funds’ total capital, and by monitoring their inimitable investments, Insider Monkey has spotted many investment strategies that have historically outpaced Mr. Market. Insider Monkey’s flagship hedge fund strategy exceeded the S&P 500 index by 6 percentage points per annum since its inception in May 2014 through early November 2018. We were able to generate large returns even by identifying short candidates. Our portfolio of short stocks lost 24% since February 2017 (through December 3rd) even though the market was up nearly 23% during the same period. We just shared a list of 11 short targets in our latest quarterly update.

At the end of the third quarter, a total of 11 of the hedge funds tracked by Insider Monkey were bullish on this stock, a change of -27% from the second quarter of 2018. The graph below displays the number of hedge funds with bullish position in TBIO over the last 13 quarters. With the smart money’s positions undergoing their usual ebb and flow, there exists a few notable hedge fund managers who were adding to their stakes meaningfully (or already accumulated large positions). 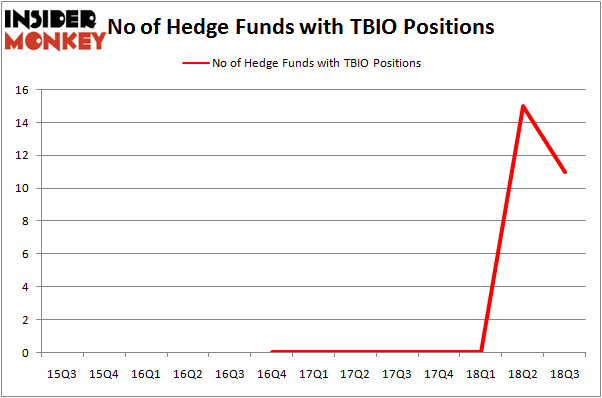 More specifically, Baupost Group was the largest shareholder of Translate Bio, Inc. (NASDAQ:TBIO), with a stake worth $19.2 million reported as of the end of September. Trailing Baupost Group was Rock Springs Capital Management, which amassed a stake valued at $10.1 million. Brookside Capital, Perceptive Advisors, and Cormorant Asset Management were also very fond of the stock, giving the stock large weights in their portfolios.

Judging by the fact that Translate Bio, Inc. (NASDAQ:TBIO) has witnessed a decline in interest from the smart money, we can see that there was a specific group of funds who were dropping their positions entirely last quarter. At the top of the heap, James E. Flynn’s Deerfield Management sold off the largest position of the “upper crust” of funds followed by Insider Monkey, valued at an estimated $8.2 million in stock. Jonathan Barrett and Paul Segal’s fund, Luminus Management, also said goodbye to its stock, about $1.9 million worth. These bearish behaviors are interesting, as aggregate hedge fund interest was cut by 4 funds last quarter.

As you can see these stocks had an average of 6.75 hedge funds with bullish positions and the average amount invested in these stocks was $42 million. That figure was $55 million in TBIO’s case. AV Homes Inc (NASDAQ:AVHI) is the most popular stock in this table. On the other hand Gold Standard Ventures Corp (NYSE:GSV) is the least popular one with only 2 bullish hedge fund positions. Translate Bio, Inc. (NASDAQ:TBIO) is not the most popular stock in this group but hedge fund interest is still above average. This is a slightly positive signal but we’d rather spend our time researching stocks that hedge funds are piling on. In this regard AVHI might be a better candidate to consider a long position.