The market has been volatile as the Federal Reserve continues its rate hikes to normalize the interest rates. Small cap stocks have been hit hard as a result, as the Russell 2000 ETF (IWM) has underperformed the larger S&P 500 ETF (SPY) by about 4 percentage points through November 16th. SEC filings and hedge fund investor letters indicate that the smart money seems to be paring back their overall long exposure since summer months, and the funds’ movements is one of the reasons why the major indexes have retraced. In this article, we analyze what the smart money thinks of Progress Software Corporation (NASDAQ:PRGS) and find out how it is affected by hedge funds’ moves.

Is Progress Software Corporation (NASDAQ:PRGS) a healthy stock for your portfolio? Prominent investors are taking a bearish view. The number of long hedge fund bets decreased by 1 lately. Our calculations also showed that PRGS isn’t among the 30 most popular stocks among hedge funds. PRGS was in 24 hedge funds’ portfolios at the end of September. There were 25 hedge funds in our database with PRGS positions at the end of the previous quarter.

In the 21st century investor’s toolkit there are plenty of tools market participants can use to appraise their holdings. A couple of the most useful tools are hedge fund and insider trading moves. Our experts have shown that, historically, those who follow the top picks of the elite fund managers can outclass the S&P 500 by a very impressive margin (see the details here).

What have hedge funds been doing with Progress Software Corporation (NASDAQ:PRGS)?

At Q3’s end, a total of 24 of the hedge funds tracked by Insider Monkey were long this stock, a change of -4% from the previous quarter. The graph below displays the number of hedge funds with bullish position in PRGS over the last 13 quarters. With hedge funds’ sentiment swirling, there exists a few noteworthy hedge fund managers who were boosting their holdings meaningfully (or already accumulated large positions). 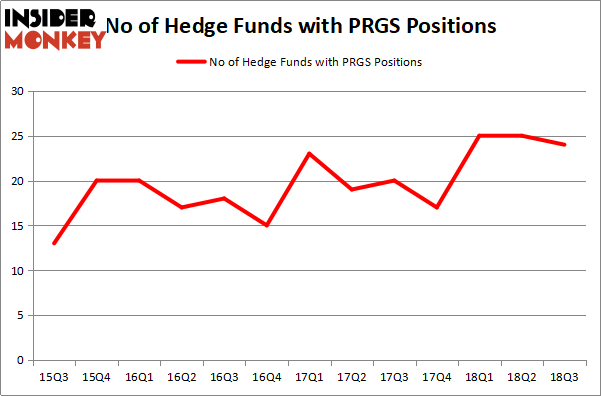 Due to the fact that Progress Software Corporation (NASDAQ:PRGS) has experienced declining sentiment from the entirety of the hedge funds we track, logic holds that there were a few hedgies that elected to cut their positions entirely last quarter. It’s worth mentioning that Michael Platt and William Reeves’s BlueCrest Capital Mgmt. cut the biggest position of the “upper crust” of funds tracked by Insider Monkey, comprising about $1.2 million in stock. Dmitry Balyasny’s fund, Balyasny Asset Management, also cut its stock, about $1 million worth. These transactions are intriguing to say the least, as aggregate hedge fund interest was cut by 1 funds last quarter.

As you can see these stocks had an average of 13.25 hedge funds with bullish positions and the average amount invested in these stocks was $105 million. That figure was $206 million in PRGS’s case. Synaptics Incorporated (NASDAQ:SYNA) is the most popular stock in this table. On the other hand Usa Compression Partners LP (NYSE:USAC) is the least popular one with only 5 bullish hedge fund positions. Compared to these stocks Progress Software Corporation (NASDAQ:PRGS) is more popular among hedge funds. Considering that hedge funds are fond of this stock in relation to its market cap peers, it may be a good idea to analyze it in detail and potentially include it in your portfolio.