Is Praxair, Inc. (PX) A Good Stock To Buy According To Hedge Funds?

Investing in hedge funds can bring large profits, but it’s not for everybody since hedge funds are available only for high-net-worth individuals. They generate significant returns for investors to justify their large fees and they allocate a lot of time and employ a complex analysis to determine the best stocks to invest in. A particularly interesting group of stocks that hedge funds like is the small-caps. The huge amount of capital does not allow hedge funds to invest a lot in small-caps, but our research showed that their most popular small-cap ideas are less efficiently priced and generate stronger returns than their large- and mega-cap picks and the broader market. That is why we follow the hedge fund activity in the small-cap space.

Praxair, Inc. (NYSE:PX) investors should be aware of a decrease in support from the world’s most elite money managers of late. Our calculations also showed that PX isn’t among the 30 most popular stocks among hedge funds.

At the end of the third quarter, a total of 41 of the hedge funds tracked by Insider Monkey held long positions in this stock, a change of -9% from the previous quarter. By comparison, 48 hedge funds held shares or bullish call options in PX heading into this year. With the smart money’s capital changing hands, there exists an “upper tier” of key hedge fund managers who were increasing their holdings considerably (or already accumulated large positions). 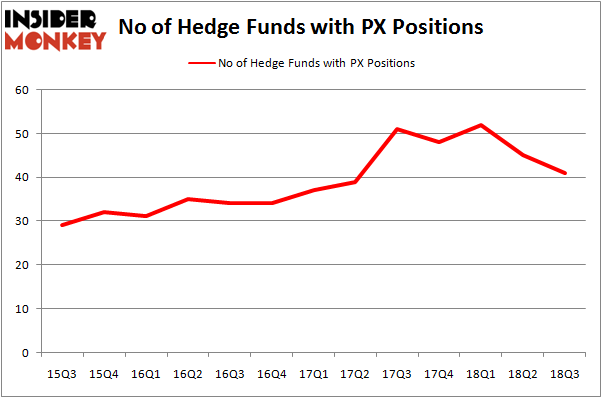 Due to the fact that Praxair, Inc. (NYSE:PX) has witnessed falling interest from the smart money, logic holds that there lies a certain “tier” of money managers that elected to cut their full holdings by the end of the third quarter. It’s worth mentioning that Christopher A. Winham’s Tide Point Capital sold off the biggest stake of all the hedgies watched by Insider Monkey, worth an estimated $37.6 million in stock. Jim Simons’s fund, Renaissance Technologies, also sold off its stock, about $29.8 million worth. These bearish behaviors are intriguing, to say the least, as total hedge fund interest fell by 4 funds by the end of the third quarter.

Let’s check out hedge fund activity in other stocks – not necessarily in the same industry as Praxair, Inc. (NYSE:PX) but similarly valued. We will take a look at Carnival plc (NYSE:CUK), Crown Castle International Corp. (REIT) (NYSE:CCI), Dominion Energy, Inc. (NYSE:D), and The Blackstone Group L.P. (NYSE:BX). All of these stocks’ market caps are similar to PX’s market cap.

As you can see these stocks had an average of 25.5 hedge funds with bullish positions and the average amount invested in these stocks was $737 million. That figure was $1693 million in PX’s case. The Blackstone Group L.P. (NYSE:BX) is the most popular stock in this table. On the other hand, Carnival plc (NYSE:CUK) is the least popular one with only 8 bullish hedge fund positions. Compared to these stocks Praxair, Inc. (NYSE:PX) is more popular among hedge funds. Considering that hedge funds are fond of this stock in relation to its market cap peers, it may be a good idea to analyze it in detail and potentially include it in your portfolio.