Concerns over rising interest rates and expected further rate increases have hit several stocks hard since the end of the third quarter. NASDAQ and Russell 2000 indices are already in correction territory. More importantly, Russell 2000 ETF (IWM) underperformed the larger S&P 500 ETF (SPY) by about 4 percentage points in the first half of the fourth quarter. Hedge funds and institutional investors tracked by Insider Monkey usually invest a disproportionate amount of their portfolios in smaller cap stocks. We have been receiving indications that hedge funds were paring back their overall exposure and this is one of the factors behind the recent movements in major indices. In this article, we will take a closer look at hedge fund sentiment towards Philip Morris International Inc. (NYSE:PM).

Philip Morris International Inc. (NYSE:PM) was in 41 hedge funds’ portfolios at the end of the third quarter of 2018. PM investors should pay attention to a decrease in hedge fund interest in recent months. There were 43 hedge funds in our database with PM holdings at the end of the previous quarter. Our calculations also showed that PM isn’t among the 30 most popular stocks among hedge funds.

If you’d ask most traders, hedge funds are assumed to be worthless, old investment tools of the past. While there are greater than 8000 funds with their doors open today, Our researchers hone in on the crème de la crème of this club, about 700 funds. Most estimates calculate that this group of people have their hands on bulk of the hedge fund industry’s total asset base, and by tracking their best equity investments, Insider Monkey has unearthed several investment strategies that have historically exceeded the S&P 500 index. Insider Monkey’s flagship hedge fund strategy beat the S&P 500 index by 6 percentage points per annum since its inception in May 2014 through early November 2018. We were able to generate large returns even by identifying short candidates. Our portfolio of short stocks lost 24% since February 2017 (through December 3rd) even though the market was up nearly 23% during the same period. We just shared a list of 11 short targets in our latest quarterly update. 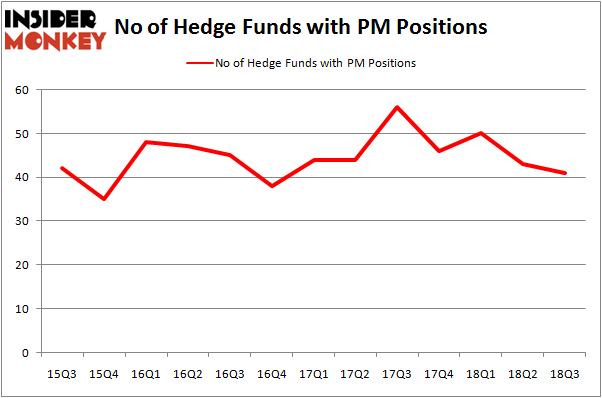 Due to the fact that Philip Morris International Inc. (NYSE:PM) has experienced a decline in interest from the aggregate hedge fund industry, it’s easy to see that there was a specific group of fund managers that slashed their entire stakes by the end of the third quarter. It’s worth mentioning that Paul Marshall and Ian Wace’s Marshall Wace LLP dumped the biggest stake of all the hedgies monitored by Insider Monkey, valued at an estimated $54.1 million in stock, and Richard Gerson and Navroz D. Udwadia’s Falcon Edge Capital was right behind this move, as the fund cut about $27 million worth. These moves are interesting, as total hedge fund interest was cut by 2 funds by the end of the third quarter.

As you can see these stocks had an average of 36.75 hedge funds with bullish positions and the average amount invested in these stocks was $2004 million. That figure was $2897 million in PM’s case. Union Pacific Corporation (NYSE:UNP) is the most popular stock in this table. On the other hand China Petroleum & Chemical Corp (NYSE:SNP) is the least popular one with only 13 bullish hedge fund positions. Philip Morris International Inc. (NYSE:PM) is not the most popular stock in this group but hedge fund interest is still above average. This is a slightly positive signal but we’d rather spend our time researching stocks that hedge funds are piling on. In this regard UNP might be a better candidate to consider a long position.