Pan American Silver Corp. (NASDAQ:PAAS) was in 15 hedge funds’ portfolios at the end of September. PAAS investors should pay attention to a decrease in hedge fund sentiment lately. There were 16 hedge funds in our database with PAAS holdings at the end of the previous quarter. Our calculations also showed that paas isn’t among the 30 most popular stocks among hedge funds.

What have hedge funds been doing with Pan American Silver Corp. (NASDAQ:PAAS)?

Heading into the fourth quarter of 2018, a total of 15 of the hedge funds tracked by Insider Monkey were long this stock, a change of -6% from the previous quarter. On the other hand, there were a total of 13 hedge funds with a bullish position in PAAS at the beginning of this year. With hedge funds’ positions undergoing their usual ebb and flow, there exists an “upper tier” of noteworthy hedge fund managers who were adding to their stakes substantially (or already accumulated large positions). 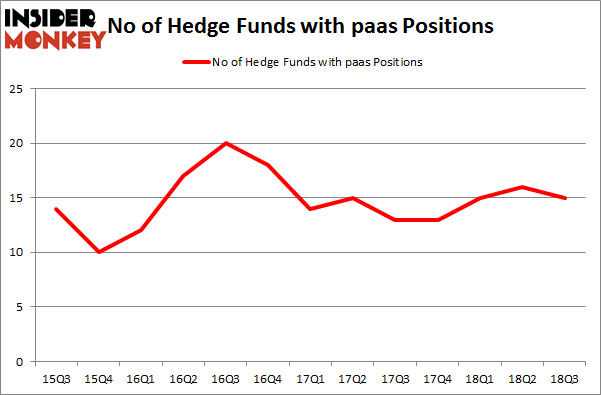 Due to the fact that Pan American Silver Corp. (NASDAQ:PAAS) has faced falling interest from the smart money, we can see that there exists a select few money managers that elected to cut their entire stakes last quarter. Interestingly, David Halpert’s Prince Street Capital Management said goodbye to the biggest position of all the hedgies watched by Insider Monkey, worth about $4.3 million in stock. Richard Driehaus’s fund, Driehaus Capital, also dropped its stock, about $2 million worth. These moves are interesting, as total hedge fund interest was cut by 1 funds last quarter.

As you can see these stocks had an average of 18.75 hedge funds with bullish positions and the average amount invested in these stocks was $251 million. That figure was $127 million in PAAS’s case. Cott Corporation (NYSE:COT) is the most popular stock in this table. On the other hand American States Water Co (NYSE:AWR) is the least popular one with only 12 bullish hedge fund positions. Pan American Silver Corp. (NASDAQ:PAAS) is not the least popular stock in this group but hedge fund interest is still below average. This is a slightly negative signal and we’d rather spend our time researching stocks that hedge funds are piling on. In this regard COT might be a better candidate to consider a long position.