Out of thousands of stocks that are currently traded on the market, it is difficult to determine those that can really generate strong returns. Hedge funds and institutional investors spend millions of dollars on analysts with MBAs and PhDs, who are industry experts and well connected to other industry and media insiders on top of that. Individual investors can piggyback the hedge funds employing these talents and can benefit from their vast resources and knowledge in that way. We analyze quarterly 13F filings of over 700 hedge funds and, by looking at the smart money sentiment that surrounds a stock, we can determine whether it has potential to beat the market over the long-term. Therefore, let’s take a closer look at what smart money thinks about Evolent Health Inc (NYSE:EVH).

Evolent Health Inc (NYSE:EVH) has seen a decrease in enthusiasm from smart money of late. EVH was in 13 hedge funds’ portfolios at the end of September. There were 15 hedge funds in our database with EVH holdings at the end of the previous quarter. Our calculations also showed that evh isn’t among the 30 most popular stocks among hedge funds.

What does the smart money think about Evolent Health Inc (NYSE:EVH)?

Heading into the fourth quarter of 2018, a total of 13 of the hedge funds tracked by Insider Monkey were long this stock, a change of -13% from one quarter earlier. Below, you can check out the change in hedge fund sentiment towards EVH over the last 13 quarters. With hedge funds’ positions undergoing their usual ebb and flow, there exists a few key hedge fund managers who were boosting their stakes considerably (or already accumulated large positions). 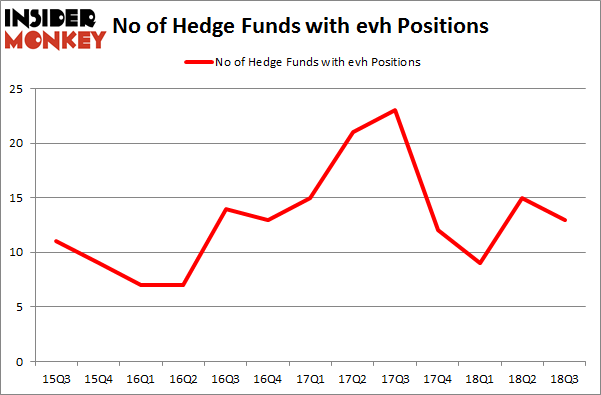 The largest stake in Evolent Health Inc (NYSE:EVH) was held by Millennium Management, which reported holding $59.2 million worth of stock at the end of September. It was followed by Columbus Circle Investors with a $34.2 million position. Other investors bullish on the company included Sectoral Asset Management, Casdin Capital, and GAMCO Investors.

Due to the fact that Evolent Health Inc (NYSE:EVH) has experienced a decline in interest from the aggregate hedge fund industry, we can see that there lies a certain “tier” of hedgies that elected to cut their positions entirely in the third quarter. Intriguingly, Israel Englander’s Millennium Management dropped the biggest position of all the hedgies followed by Insider Monkey, comprising an estimated $3.4 million in stock, and Paul Marshall and Ian Wace’s Marshall Wace LLP was right behind this move, as the fund said goodbye to about $1.1 million worth. These bearish behaviors are interesting, as aggregate hedge fund interest dropped by 2 funds in the third quarter.

As you can see these stocks had an average of 10 hedge funds with bullish positions and the average amount invested in these stocks was $83 million. That figure was $139 million in EVH’s case. Finisar Corporation (NASDAQ:FNSR) is the most popular stock in this table. On the other hand Yirendai Ltd. (NYSE:YRD) is the least popular one with only 5 bullish hedge fund positions. Evolent Health Inc (NYSE:EVH) is not the most popular stock in this group but hedge fund interest is still above average. This is a slightly positive signal but we’d rather spend our time researching stocks that hedge funds are piling on. In this regard FNSR might be a better candidate to consider a long position.

Is II-VI, Inc. (IIVI) A Good Stock To Buy?
Monthly Newsletter Strategy
Download a free copy of our newsletter and see the details inside!
Hedge Fund Resource Center
Related News
Hedge Funds Double Down On Evolent Health Inc (EVH): What Did They Discover? Spark Therapeutics Inc (ONCE) and Other Profitable Healthcare Picks of Casdin Capital 11 Best Inexpensive Bourbons Under $25 That Don’t Taste Cheap 10 Best Vacation Spots for Singles in Their 40’s 15 Highest Paid YouTubers of 2018
Billionaire Hedge Funds